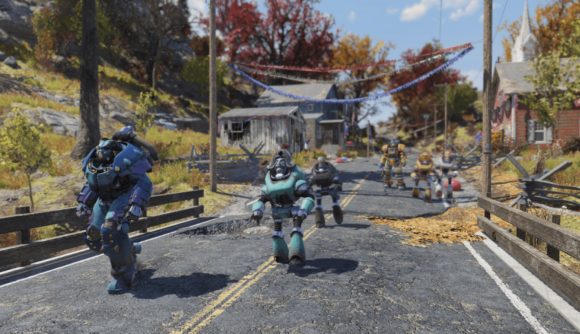 War… war never changes. And even if nuclear war has reduced most of human civilisation to glow-in-the-dark rubble, traditions remain traditions. That’s true in Fallout 76’s Appalachia, where its annual Fasnacht Day celebration has begun. Head to Helvetia to join in the fun – there are rare rewards on offer.

Fasnacht Day is the Pennsylvania Dutch observance of what is known in other parts of the world as Fat Tuesday, Shrove Tuesday, or (delightfully) Pancake Day – it’s the day before Ash Wednesday and the beginning of the 40-day Lenten fast leading up to Easter. Generally this has been celebrated by eating traditional fastnachts, which are a type of doughnut, but in this post-apocalyptic MMO game, the day is marked with hourly robot parades.

You can head to Helvetia to join in the celebration. You’ll be asked by the master of ceremonies to help the local Protectrons out with their party preparations – gathering ingredients, putting up decorations, and practicing tunes. Then, everyone will gather in the centre of town to kick off the Fastnacht Parade.

That’s when things apparently get a bit interesting. Your job at this point is to protect the parading Protectrons until they reach the end of the parade route, and the more of them that survive the trip, the better your rewards will be for helping out.

The parades begin at the top of the hour every hour from now through 9:00 PST / 12:00 EST / 17:00 GMT February 22. There are neat masks to win if you decide to participate, so head to Helvetia and join the festivities. Maybe you’ll be able to find out whether robots can enjoy fresh doughnuts.