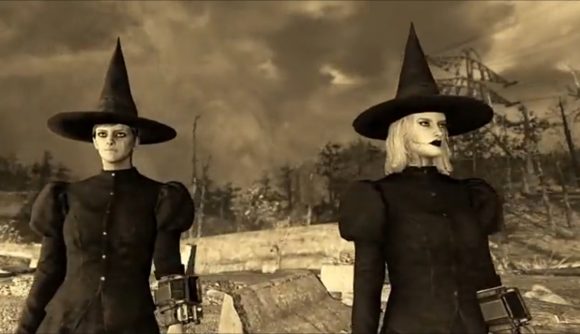 A group of performers will take to the stage in Fallout 76 to present what is arguably Shakespeare’s most Halloweeny play, Macbeth. The Scottish play, as it’s commonly known, will be staged at the MMORPG’s recently constructed recreation of the bard’s own Globe Theatre in Grafton.

The quick, 10-minute version of Macbeth involves two separate Fallout 76 acting troupes, the Fallout Five-O New Responders and the Free States roleplaying faction. Handling production and directing is Northern Harvest, who we spoke with back in July about bringing the art of theatre to Appalachia.

The play will be held October 23 at 6 p.m. PT / 9 p.m. ET / 2 a.m. BST. No single Fallout 76 world instance holds enough players for a packed house, but don’t worry about logging in and standing in line – the production will be broadcast to Twitch, and you’ll be able to tune in at the Fallout Five-O channel. Refreshments will be available on a ‘bring your own’ basis, naturally, so make sure to get the popcorn taken care of ahead of time.

The show is one night only, as the trailer below makes spookily clear:

A NIGHT AT THE THEATER! We proudly look forward to presenting the 10 min Macbeth play, LIVE! Directed & hosted by @76Theatre & partnering with @Free_StatesMil

Our actors will perform on stage for the first time! Your tickets are in your pipboy! Only on https://t.co/YgAfzf7eri pic.twitter.com/I1al0L6dpr

While Macbeth is the Grafton Globe’s Halloween season offering, the theatre has already played host to stagings of Grease, The Assassination of Abraham Lincoln, and the opening scene from Indiana Jones and the Raiders of the Lost Ark.

So far, Appalachia seems much more welcoming to thespians and theatre than GTA Online’s Los Santos, where a pair of enterprising fellows have tried hosting a chat show, only to be repeatedly murdered.