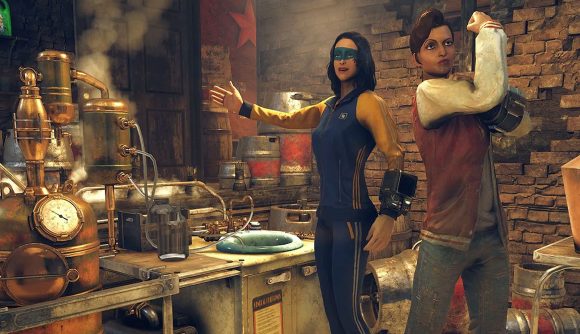 It’s no secret that Fallout 76 had a bit of a rocky start when it launched in 2018. We scored it a five out of ten in our Fallout 76 review, calling it “an encumbered yet empty spin-off”, and the MMORPG’s scores across its other reviews told a similar story. Since then, though, it’s seen a significant turnaround, with huge updates like Wastelanders adding human NPCs and a load of extra content, and there’s plenty more on the way, too. And now, Fallout and Elder Scrolls series director Todd Howard has indicated other Bethesda multiplayer-only titles could potentially follow.

In an interview with GamesIndustry.biz for this year’s Develop:Brighton keynote, Howard talks about the studio’s experience of developing Fallout 76. “Overall, it’s been a really positive experience for us,” he tells the site. “It’s made us much better developers, much more connected with our community. So I can’t say it’s going to be a one-off.”

Additionally, GI reports the dev would want there to be far more beta testing in the event of a future multiplayer title, instead of launching something that was a brand-new experience for most people diving into it, which is something Howard discussed at last year’s E3.

Todd said of the game at the time, “My main regret is not doing a beta that a lot of people could play. If we had made it free for every Fallout 4 player and run a 24/7 beta for a longer period of time that would’ve let us see, ok, what are we really dealing with here?”

Join the Brotherhood and reclaim the Wasteland! #Fallout76 pic.twitter.com/rjbI6FARDm

Whether we’ll see a new MMO title from Bethesda at some point, however, is unknown at this point – and given the studio’s currently got Starfield and The Elder Scrolls VI in the works, it seems unlikely we’ll see anything of this nature get announced any time soon.

To check out all the latest details on the Starfield release date, Elder Scrolls 6 release date, and everything we know about the two upcoming PC games so far, you know where to click.