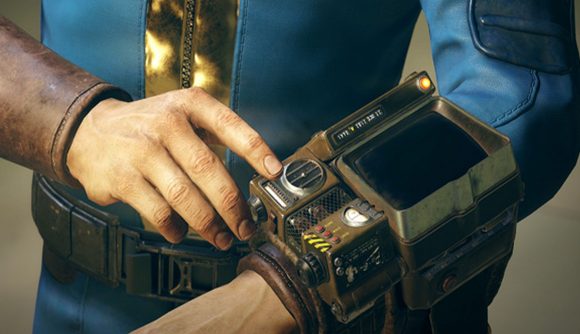 If you caught that Fallout 76 2021 roadmap reveal a few months back, you’ll know there’s a major new update coming this summer: Steel Reign. Drawing a close to the Brotherhood of Steel story, the update will bring new quests, NPCs, locations, and rewards – and the groundwork for this will start hitting the PTS very soon. Plus, there’s another, smaller update coming this month, too.

In a blog post on the MMO’s site, Bethesda has announced that the new PTS launch will bring the “entire Steel Reign questline, during which you’ll experience the conclusion of the Brotherhood of Steel story that began with Steel Dawn”. Plus, there’ll be a bunch of other new content to try out, including a new legendary crafting system, legendary attribute rebalance, and a Meat Week seasonal event.

Bethesda’s aiming to kick off playtesting for the next PTS iteration May 14 – so, this very day – though the studio says that if anything gets in the way of launching as planned, it’ll open the PTS up early next week instead. It doesn’t look like it’s live as of this story, but you can head to the multiplayer RPG game’s forums here to find out when it does drop.

As for that other, smaller-scale patch on the way, Bethesda says you can expect it to drop on May 25, with some “prep work” for the Steel Reign update, bug fixes, and new Atomic Shop items in tow. For the full patch notes, you’ll need to keep a weather eye on the Fallout 76 site when downtime begins, as they’ll get posted there.

In this week's Inside The Vault article:

Fallout 76’s Steel Reign update is due to drop some time in July, with the latest community calendar revealing that there are some in-game events, like a mystery pick purveyor sale, ‘Hunt for the Treasure Hunter’ hunter weekend, double SCORE weekend, and more to come that month.

For now, we’re into the midst of Fallout 76’s Locked and Loaded update, which means SPECIAL loadouts, CAMP slots, and Fallout 76 Season 4 rewards, which you can find out more about at those links if you’re just getting back into post-apocalyptic Appalachia.