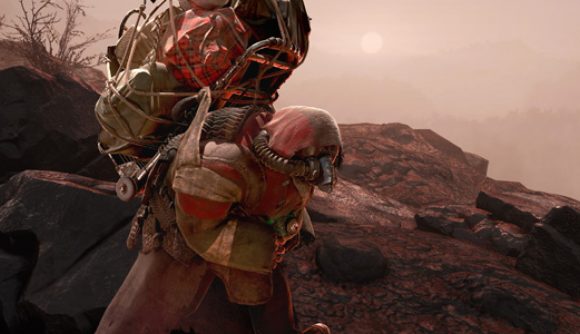 Mole miners are a type of mutant particular to Appalachia – a holdover from its pre-war past, in which the region was heavily exploited for its rich resources. The mole miners are mutated humans who have adapted to life in caves and abandoned mines, and typically when you meet them they’re both angry and heavily armed.

However, the treasure hunter mole miners have ditched big weapons in order to be able to carry more of the valuable oddities and gear they scrounge for. Unarmed, they’ll flee when players approach – but you’ll have to catch and kill them to take their valuable mole miner pails full of loot. On the Fallout 76 subreddit, more than a few players have said that they feel a bit bad doing this.

Not exactly a fair fight, we’d agree. “I’ve caught myself multiple times thinking, ‘god, this just doesn’t feel right’ as I back them into a corner and spin up the blender,” Anoruc says.

While one player justifiably observes that it’s only because the treasure hunters are laden with treasure that they don’t attack the way any other mole miner would, others point out that there’s no way to conclusively know this beforehand.

“How do we know?” asks SnooBooks7082. “Maybe they finally got enough treasure together to leave the mining life behind. Move out of Appalachia entirely and settle down somewhere quiet. Rumours of a small town out North Moletopia full of those who have escaped the molerace.”

“Oh god, all they ever wanted was to build a life for their family,” DerangedGinger frets. “We’ve been slaughtering hard working family moles.”

That may be true, although it seems mole miner culture is a bit on the bloodthirsty side. Players deciphered some of their voice lines about a year ago and found some disturbing barks, including phrases like “Line the tunnels with your bones!” and “dig straight into your eyes!”

It doesn’t sound like the Fallout 76 subreddit feels bad enough about killing treasure hunter mole miners to actually stop doing it – they just get a little twinge of guilt when it happens.