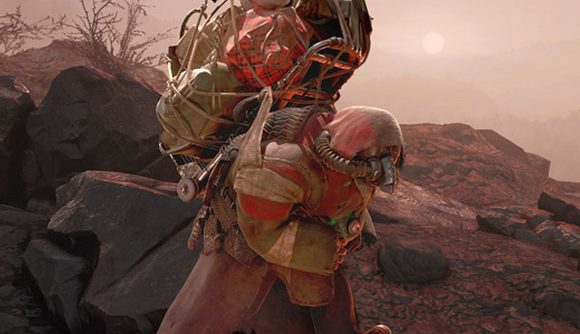 Fallout 76 is in for another chunky update next week, which will bring a hearty batch of new content, festive goodies, and bug fixes to Bethesda Game Studios’ online roleplayer. The studio has announced that, alongside some “behind-the-scenes groundwork” for the upcoming Steel Dawn update (previously announced in the Fallout 76 2020 roadmap), there’s a brand-new Treasure Hunters event on the way with the online RPG game’s impending patch.

“Next Tuesday, October 13, we’re planning to release a new update that will address a number of bugs, including several community-reported issues, bring festive new items to the Atomic Shop, and lay some behind-the-scenes groundwork for our Steel Dawn Update, which is currently slated for later this year,” Bethesda posts. While the incoming update might be a tad smaller on the content side than some others that have dropped this year, starting October 15 at 17:00 BST / 12:00 ET / 09:00 ET ‘Hunt for the Treasure Hunter’ arrives in-game, running until October 19 at the same times.

Following in the vein of May’s Ash Heap Treasure Hunter event, the October version will once again see those Mole Miners break through to Appalachia’s surface on the hunt for riches “this time, throughout the entire Wasteland”.

Improvements to the Treasure Hunter event this time around include the fact that the Mole Miners will spawn all over the place, with levels that “adjust dynamically up to 50”. So, that means legendary loot drops that’ll better line up with your own level.

Some of these #Fallout76 Shelters are pure witchcraft. 🕯
Check out what the community has created here: https://t.co/7mxyv9nG2z pic.twitter.com/x7RE5XGkC3

Plus, loot is now contained in its own event-specific pool (with a bunch of new goodies you can’t scoop up elsewhere), Mole Miners have a bigger chance of dropping Ornate Mole Miner Pails, and you’ll be more likely to get “event-exclusive rewards” from pails that are lower in quality going forward. Last, you’ll now shell out fewer caps on player-crafted Mole Miner Pail components.

Elsewhere in the notes, Bethesda says PTS testing of Fallout 76’s C.A.M.P. shelters is still in full swing, and there’s a bunch of neat player creations to ogle over on the page. While you’re waiting for the event to kick off and shelters to arrive in-game, check out our Fallout 76 mutations and Fallout 76 leveling guides for some tips.