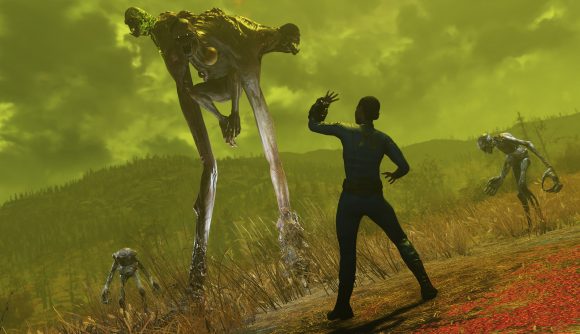 Fallout 76‘s next big expansion is scheduled to launch very soon, as Bethesda aims to make good on its promise of blending modern Fallout with multiplayer games. Wastelanders makes a load of big changes to the game, not the least of which is a Steam version. Now that we’re on the eve of the Wastelanders release date, Bethesda has revealed precise release times for the new, free expansion.

Fallout 76: Wastelanders will go live on April 14 at 4:59 PDt / 7:59 EDT / 12:59 BST – that’s a single, global release time. The countdown on the game’s Steam page matches these release times, so you can expect the Steam version to go live alongside the expansion’s launch on consoles and the Bethesda launcher.

Wastelanders adds human NPCs to the game alongside a new main quest, a faction reputation system, and a load of new locations, enemies, and weapons. Several of those features pretty directly address fans’ disappointment when the game launched back in 2018, so hopefully the new expansion can help give it a new life. Oh, and if you’re wondering, we’ve already asked a scientist how realistic Fallout 76 is…

The update was initially scheduled to launch a week ago, though Bethesda’s adjustments to remote work during the COVID-19 pandemic did delay the launch back to tomorrow’s date.

If you're wondering when #Wastelanders will be available to play tomorrow, take a look at our map. 👇 pic.twitter.com/3iFWrZb3k5

There are more apocalypse games for you to check out, just in case 2020 hasn’t already brought enough tastes of the end times to your door.