Fallout: New Vegas’s branching main questline is one of the strongest in the series but – as in almost every Bethesda-backed RPG – the meat of the game is in its side-quests. When you are not hunting down the mobsters that left you for dead, you can find escorts for casino clientele, bust open a human trafficking ring, or hunt down the rare eggs of critters across the wasteland.

Here are the Fallout 5 settings we’d love to see.

But Come Fly With Me is the pick of the bunch. It compresses the best of New Vegas into a single, wonderful slab. It has memorable characters, tense combat, humour and meaningful choices to make. And, most excitingly, it has a trio of rockets launching into space soundtracked by Wagner’s Ride of the Valkyries. What more could you want?

It starts when you are directed to the REPCONN test site, a former rocket-testing facility west of Novac town. After mowing down a few enemies outside you are greeted by a gaggle of ghouls that believe they are on a divine quest to ‘The Far Beyond’, where everything their mutated hearts desire is up for grabs. They plan to reach ghoul heaven by riding in rockets. Problem is, those rockets are in the basement of the test site, where there are also invisible demons with big swords. That’s where you come in. 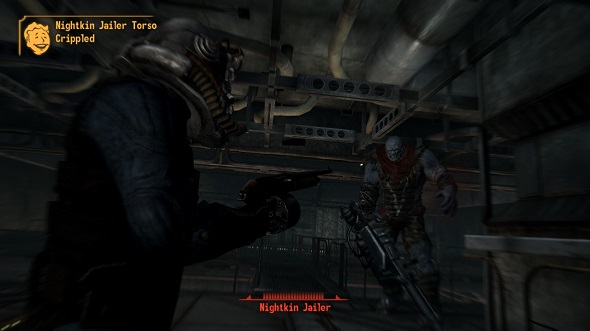 It is a good hook, and Come Fly With Me keeps the ridiculous-o-meter dialled all the way up throughout, largely through its eccentric cast. The pious Bright Brotherhood, as the ghouls are known, are led by Jason Bright, a glowing ghoul that claims to know what his deity is thinking and believes you are a miraculous gift sent to help the ghouls fulfil their dreams. His dialogue is poetic (his speech before the ghouls board the rockets at the end is a standout moment) and his voice echoes hypnotically. Even if you think he is talking from his rear, his words are surreal enough to make you want to find out what happens next.

Initially, Jason will send you down to the basement to clear out the demons. These creatures turn out to be Nightkin, large super mutants that can turn invisible. Fighting them is tricky: you will hear them before you see them, that blur in the corner of your screen becomes a towering, snarling monster yielding a flamethrower the size of a brahmin. The sound design does some heavy lifting here, and the corridors are full of whirring machines, sudden clanks of metal, and stabbing high violin notes that ramp up the tension.

If you don’t fancy wiping these brutes out (and good luck if you do), then you can instead reason with them through their leader, Davison, who is worth seeking out. His brain is addled to the point that he worships an antler’s skull that sits on his desk, and he will only act with its imaginary permission. Like a lot of the quest’s characters, I am not sure whether to pity Davison’s plight or chuckle at the self-aware writing – “my kin are not right in the head like I am.” 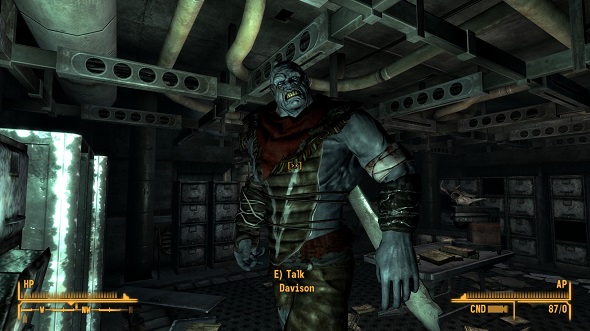 You can convince him to leave peacefully, providing you can find evidence that a shipment of Stealth Boys (which is why the Nightkin travelled here in the first place) has been moved elsewhere. That leads you to Harland, a ghoul that originally lived with the others until he became trapped in the basement.

He says he does not believe in Bright’s religious “mumbo-jumbo” and was just tagging along for the “ghoulettes.” Nice. Get him to leave by finding the body of his friend (or just shoot him), grab a shipping note for the Stealth Boys, and then show it to Davison. Voila, task complete.

The stage is now set for the star of the show, Chris Haversam, a human that thinks he is a ghoul, and talks in their raspy tones. He is the tech-minded brain behind the escape operation. As the ghouls prepare to leave you will get to know him better. Again, it would be tragic listening to his tales of how he was treated in his vault when he was a boy if the reason for his affiliation wasn’t so absurd: he has gone bald. He reckons it was the radiation, see. 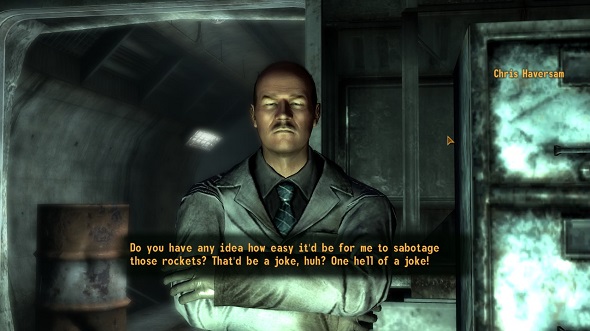 When you point out that, actually, he is just follicly challenged, he flips. “You call this bald, smoothskin? I’m a monster!” Lay down enough charm and you can get him to come around to the truth. At that point his anger turns to Bright, who kept him around to work on the plan knowing all along that he would have to stay behind because humans would not survive the trip. Haversham now wants to sabotage the rocket launch and kill all the ghouls – you can let him do it or talk him out of it, which leads to a few more minutes of sparkling dialogue as he slowly calms down.

The dark spots in Come Fly With Me are the two items you must fetch to get the rockets to work.. The schleps, though not drastic, are a little tedious, so I fast-travel through them as much as possible. One item does give you the chance to flirt with an old lady to save yourself 500 bottle caps, however, so there is that.

I am willing to forgive that ten minutes of pain for what comes immediately after. I have always felt that set-pieces in both Fallout 3 and New Vegas do not feel as epic as the games want them to feel, but there is something about watching the dome of the launch hangar slide open to reveal the rockets waiting below, the sound of trumpets tooting out. It is ludicrously fun. 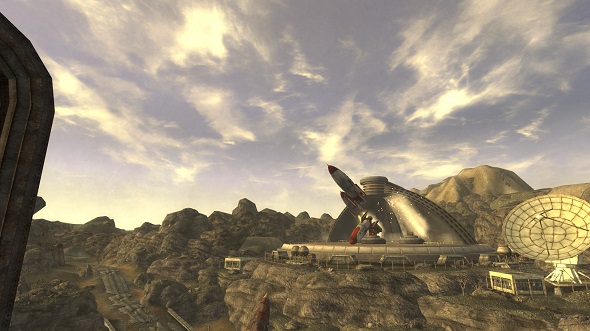 And there is a last moment of twisted humour, too. If you are a) roleplaying an evil character, b) decide you do not like the ghouls after all, or c) want to cackle wildly while strumming your fingers together, then you can play with a control panel to alter the path of the rockets at the last moment. Instead of blasting skyward they will career explosively into each other in a deadly fireworks display.

It is the characters that shine in Come Fly With Me, but the boom of the rockets provides a fitting and memorable end to what I think is the best hour and a half in New Vegas. If you ever find yourself back in the Mojave Wasteland, make a beeline for the Bright Brotherhood. You won’t regret it.