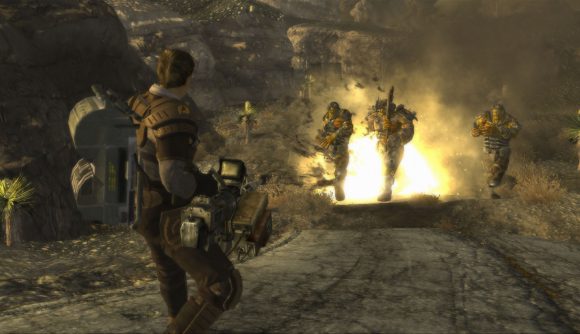 Now that Microsoft is buying Bethesda parent company ZeniMax in a deal worth a reported $7.5 billion USD, fans around the world are speculating on the implications. Is a Fallout New Vegas 2 potentially in the works? Hey, it’s not off the table, according to Fallout: New Vegas developer Obsidian Entertainment.

Obsidian, the studio behind New Vegas and other hits including Alpha Protocol and Neverwinter Nights 2, was itself acquired by Microsoft in 2018. It went on to release The Outer Worlds and is currently working on the early access title Grounded as well as a new RPG game, Avowed. When Microsoft announced its planned acquisition of ZeniMax, long-time Fallout fans naturally began wondering whether it might be possible for Obsidian to return to its old irradiated stomping grounds. “So Fallout New Vegas 2 is a legit possibility now, right!?!?” one asked on Twitter.

The official Obsidian account retweeted the question and added a ‘shrug’ emoji. That’s not confirmation of a follow-up to New Vegas, of course, but it does signal that at this point, anything’s possible.

Fallout: New Vegas is considered to be the best of the Fallout games since Bethesda bought the franchise and transitioned it into the 3D perspective we know and love today with Fallout 3. Obsidian’s unique storytelling and world design elevated New Vegas, giving it one of the series’ best narratives and inspiring a host of imaginative Fallout: New Vegas mods.

Time will tell if we’ll be able to return to post-apocalypse Mojave and revisit the conflict between the New California Republic, Caesar’s Legion, and Mr. House.