The world of Fallout is a dark one. The day the nuclear bombs fell, humanity and all it had built was scorched to a crisp, and almost entirely wiped out in the process. But consider, if you will, that were the bombs to drop at this very moment, 83 million of us would die on the toilet. Around 350,000 of us would die having sex, and even more people would be having sex with themselves (as one unfortunately immortalised Pompeian attests).

Were the world to stop right now, we would all be compromised, the secrets of our lives laid bare, our skeletons standing (or lying, or crouching) testament to the ways we lived. The creators of Fallout have always understood that. But so much is lost over time, the powers of decay and degradation twisting forms out of shape, making each frozen death captured by the sudden blast inexplicable, devoid of their context.

This is where the Fallout series gets its signature tone and nowhere else is it displayed better than in the corpse jokes that litter is irradiated wastelands. A snapshot into the lives of the people who weren’t quite as lucky as you – not to mention a disturbing glimpse into the feverish imaginations of Fallout’s developers – these osseous reminders of a society long decimated are as poignant as they are hilarious.

So, for your perusing pleasure, we present to you some of our favourite corpse jokes from across the sprawling Fallout series. 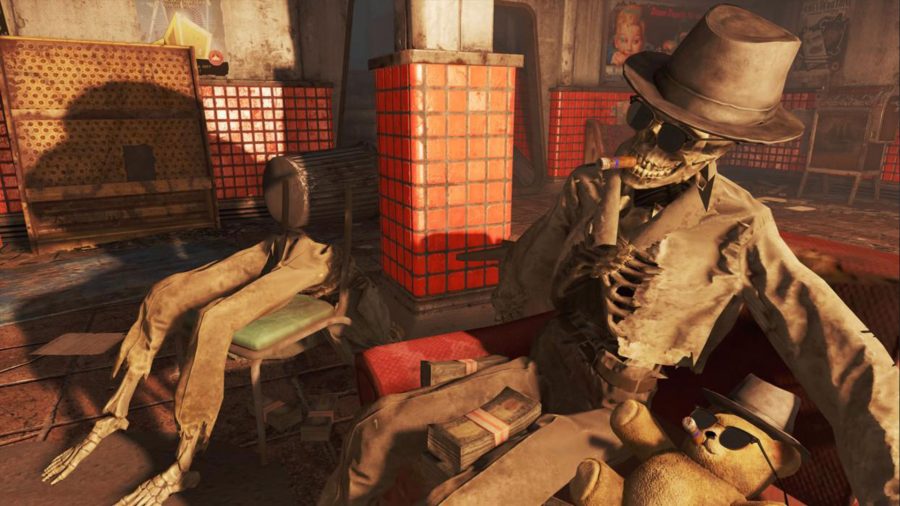 If you knew you were about to die, how would you spend your last few moments? Would you tell someone how you really felt? Punch your boss in the face? The only correct answer to that question is this: you dress up like a Blues Brother, in your favourite hat and sunglasses (dress your teddy bear up as well, because you have no friends), sit in your favourite subway station, and shower yourself in your life savings before lighting up a cigar.

You’ll find Shades at the Valenti Station in Fallout 4, just south of Old North Church, near the park the Radstags usually congregate at. We like to think he didn’t know he was going to die and this is simply how he spent a normal day. We salute you, Shades. 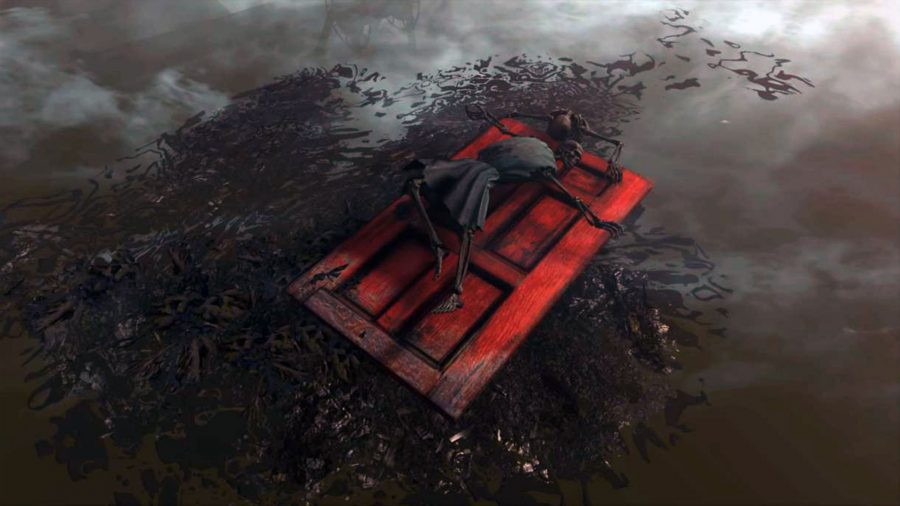 At Fallout 3’s Point Lookout, just out to sea from Coastal Grotto, you’ll find this dino-boy. The skeleton and the rifle make it seem like a Jurassic Park reference, but from the giant skeletons that dot Far Harbour’s coastline and a mention by a caravaneer at Bunker Hill, it’s possible to infer that there are creatures of the deep - Ghoul Whales, which still roam the poisoned seas. Is this one of them?

On the island of Far Harbour in Fallout 4, north of The Nucleus, you’ll find these waterlogged lovers. While obviously a reference to Titanic, we prefer to imagine the real-world context of this scenario. Perhaps these two were actually Titanic reenactors. They got a romantic kick out of sneaking down to their local lake and performing the climactic scene from the movie. They were just unlucky that the bombs landed before they returned home to do the usual – recover from hypothermia with a round of love-making..

But it does make us wonder if the Titanic film exists in the Fallout universe. So many aspects of our world are already parodied by the games and we do know there’s a film called Love Sets Sail! starring Vera Keyes and Mike Berlyn. Perhaps that film also has a scene with a giant door and two people who don’t understand surface area… 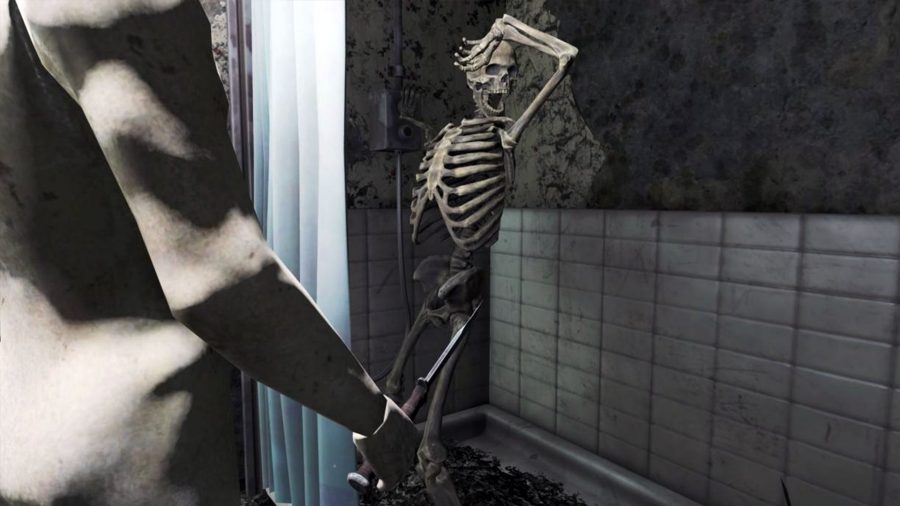 In Fallout 4’s Nuka World (inside The Magical Kingdom) you’ll find The Fun House. It’s a location you pass through when chasing the ghoul magician, Oswald the Outrageous. But if you stop to take a moment, especially in the spinning room with all the doors (and dizzy ghouls), there are some weird and wonderful sights to discover.

Get the upper hand: Fallout 4 console commands and cheats

Behind one of the doors you’ll find this obviously constructed reference to the shower scene in Psycho. But there are all sorts of unusual situations behind the other doors, too: toys watching TV, gnomes playing poker, a shrinking corridor with a tiny mannequin – plenty to satisfy any craving for weirdness. 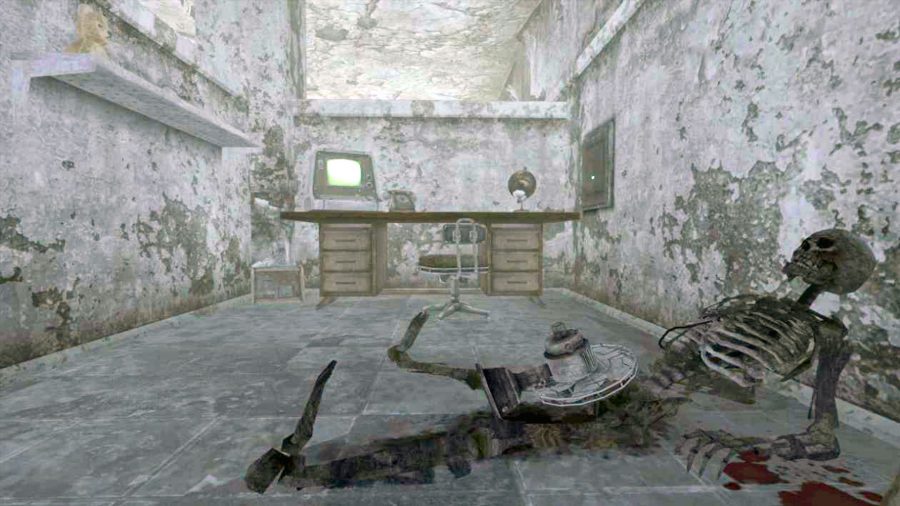 Let’s just take a moment to appreciate this Fallout 3 masterpiece. How can you not love this? This is Harold Callahan, security officer at the Pentagon. In his day job, he had to deal with a variety of weird incidents; crazy generals shooting vending machines, employees getting it on in the stairwell, and secretaries accusing each other of being commie spies.

If your day job is that stressful you’ve got to find some way to relax, right? Either that, or weird incidents simply haunted Harold, right up until the moment a nuclear blast blew a fan into his crotch. RIP Harold. If you want to go and pay your respects, blow up the Citadel in Broken Steel, and within the ruins you’ll find a door. You can also nab a magnum from Harold’s safe. 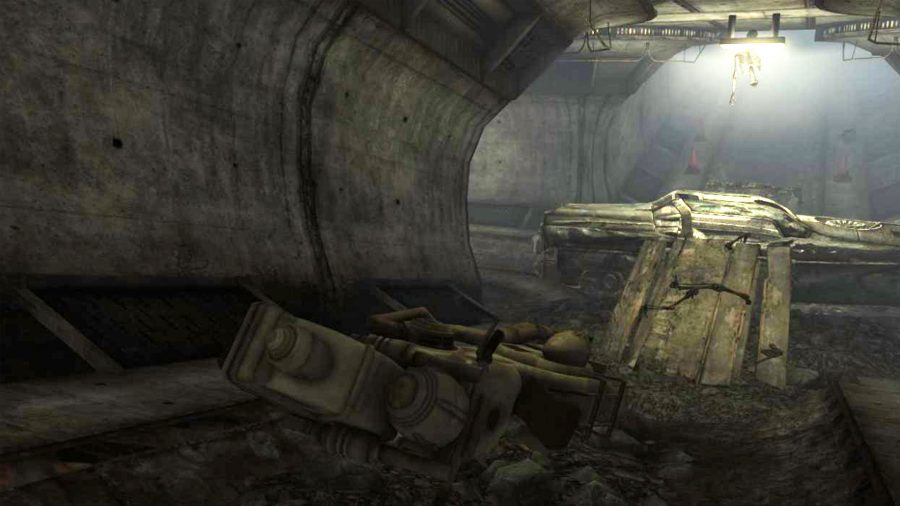 It doesn’t take a genius to piece together what happened here. But the real question is how did this happen? Below the White House in Fallout 3 is the Presidential sub level, a metro leading to the John Adam’s air-force base (as we learn in Broken Steel). When you enter the utility area to access the sub level you’re faced with this. How does someone get a bike and car into a sewer, going to that level of thought in creating the stunt, but then not factor in the light?

Our speculation is that this is actually the Last President (or at least a senior member of his administration). Firstly, to even get a car into the sewer beneath the White House, you’d need authorisation. Secondly, it’s highly likely he knew nuclear war was coming (everyone did) and thirdly, we know the Last President was a bit of a ‘do-what-you-want’ kind of guy, demonstrated by him sleeping with several of his campaign staffers. When the bombs dropped, we reckon he just said ‘screw it’ and went downstairs to ride his bike. The rest is definitely not canon. 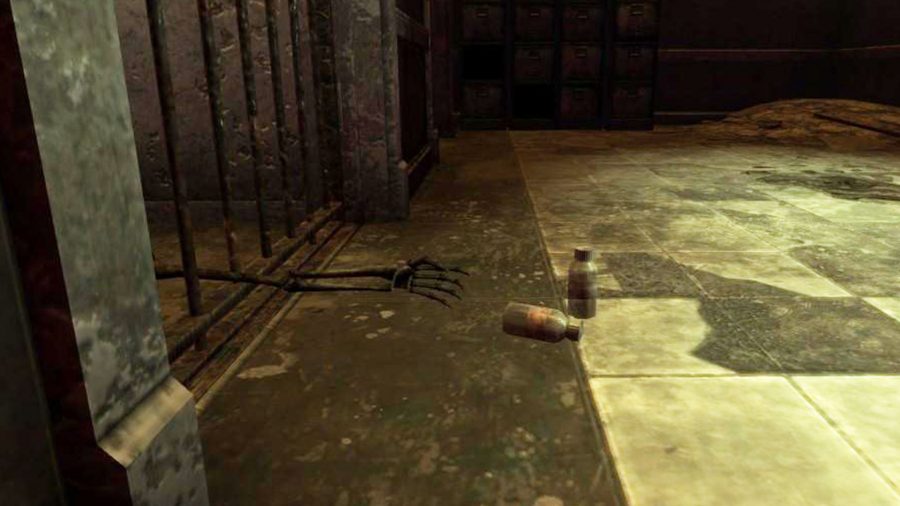 This one isn’t funny but it does demonstrate the other side of the corpse posing in Fallout. The kind of scene that punches you in the gut: the bus full of school kids in Honest Hearts; the burnt out trailer with the child skeleton in New Vegas, or this, in Fallout: New Vegas’s Dead Money.

The wackiness of the Fallout games is juxtaposed by the darkness of post-apocalyptic America. You can see it here, as a skeletal hand stretches out from behind bars, the bottles of water that may have given the prisoner a day or two more life just out of reach. 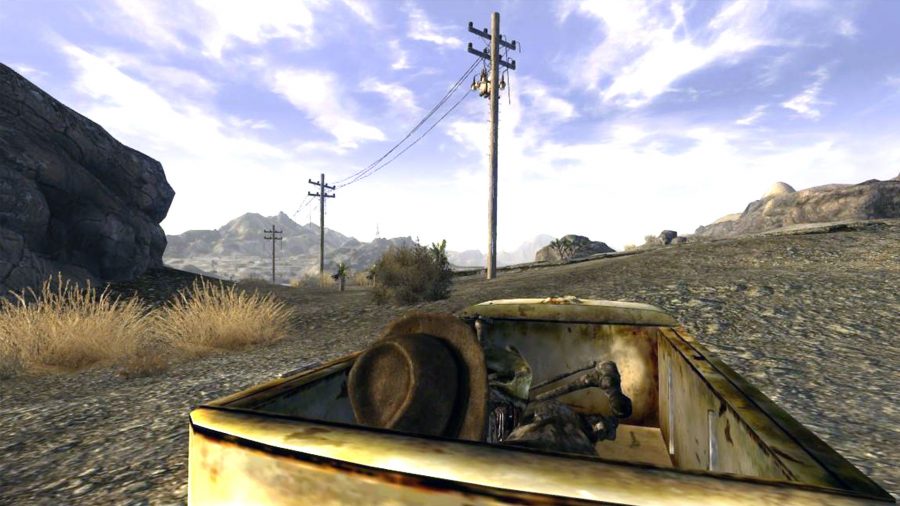 Fallout: New Vegas is the strangest Fallout game. Something about the glitz and glamour of Sin City turns all the factions into weirdos (maybe it’s the heat?). But hell, if that’s not enough for you, there’s a character perk that adds more oddities to the game.

Prefer hanging out with the living? The best Fallout companions

If you have the Wild Wasteland perk and take a little wander south of Goodsprings, you’ll find Dr. Jones. If you didn’t catch this back in 2010, it’s a reference to the fourth Indiana Jones film, in which he survives a nuclear test blast by climbing into a fridge. The smashed fridge and the skeleton inside are blanching under the desert sun. It’s one of the most accurate and original film references the series has ever made. For that reason alone, Indy in the fridge will forever hold a place in our hearts.

OK, that’s our list. Remember kids: if you ever spot a mushroom cloud outside that window, screw saying goodbye to your loved ones. Tell your spouse to get in the bathtub with a toaster, get your kids to pose mannequins so it looks they murdered everyone, and tell grandad to get in the fridge. Then run to your wardrobe and put on the most random outfit you can muster, hurry into the kitchen, and grab the first implement you can find. Then, if you have time, strike a pose! The scavvers who visit in 200 years time aren’t likely to forget your house in a hurry.