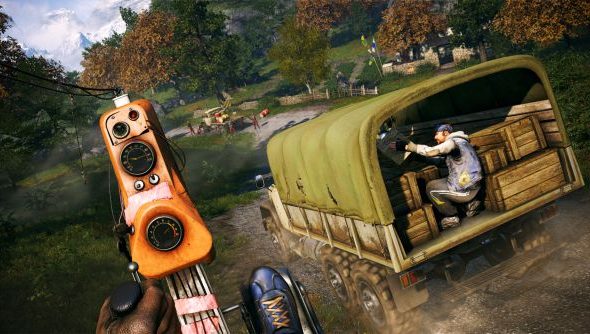 Far Cry 4 players will remember that Hurk is your fellow American and murder-tourist in Kyrat – the one with the beard and the inability to tell Golden Path from Royal Army. He also doubles as Player 2 avatar in co-op, but if you haven’t been bombing outposts with a friend you won’t have seen an awful lot of him.

That can change, if you want it to, with today’s Hurk Deluxe DLC.

Hurk Deluxe comprises five missions playable in co-op and single player, with names like Yak Farm, Blood Ruby and Hurk’s Redemption. I bet the last one even takes the camera away from you and wobbles it about for a minute or two, so you know it’s a serious story mission.

The DLC comes with an “arsenal” of new weaponry – including a harpoon gun for Hurk.

You can buy it alone, or as part of the season pass that currently includes the permadeath Escape from Durgesh Prison and The Syringe, and will eventually incorporate things called Overrun and Valley of the Yetis.

To be honest, though – and I had the same problem with Assassin’s Creed IV: Black Flag – Far Cry 4 is far too vast for me to start worrying about its DLC schedule. The game tells me I’m about 30% done after several outpost-gathering excursions. How about you?