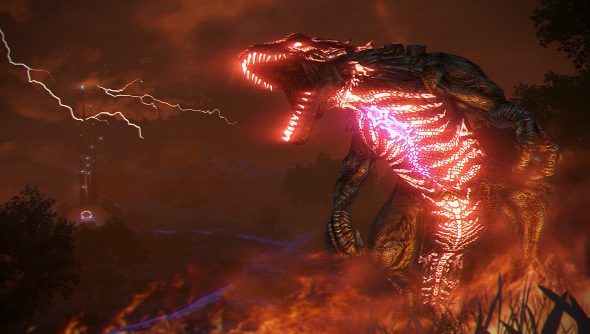 Far Cry 3: Blood Dragon was a whole lot of stupid fun, a game where – just in the first 30 minutes – you punch a nuke, unleash dragons on enemies and stab, shot and fling shurikens at Daft Punk lookalikes. Ubisoft Montreal won’t be making a sequel.

Unfortunate, sure, but the reasons behind the decision make sense and are extremely unexpected for Ubisoft.

On the IGN Pubcast Happy Hour, Far Cry 4 creative director Alex Hutchinson confirmed that there would be no more Blood Dragon, and it’s because the studio wants to do something different.

“It was surprising, and it was a great use of the Far Cry 3 base,” said Hutchinson. “But hopefully we’ll be able to come up with something that surprises you just as much. Because if we did another one, you’d be on my Twitter saying ‘Are we going to have a Blood Dragon every year? You’re just in a factory churning things out.’”

While Blood Dragon was funny and filled with flashy action, one of its strengths was that it came out of the blue. Essentially, Blood Dragon is a joke that was turned into a game, and a joke told over and over again loses its punch. If Ubisoft ended up making it yet another open world franchise, then it might get a bit tired.

Far Cry 4 is due out next week, and perhaps Ubisoft Montreal will be able to surprise us again with another weird standalone expansion next year.