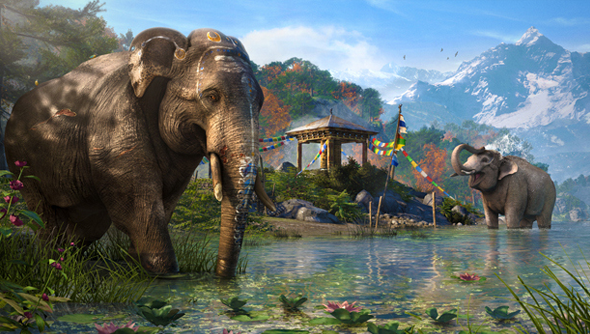 The last year has seen Ubisoft kick out some unusual games, from the absurdity-loving 80s homage Far Cry: Blood Dragon to the tear-inducing Valiant Hearts. They’re all personal labours of love for small teams, and it looks like the next unique project from Ubisoft may be coming from Far Cry 4’s creative director Alex Hutchinson.

Along with members from the Far Cry 4 and Assassin’s Creed 3 development team, Hutchinson has had a pitch for his game idea greenlit by some head honchos at Ubisoft.

Talking to CVG, Hutchinson said: “I’ve got clearance along with a bunch of people from AC3 and AC4 to go off and do something new after [Far Cry 4],”

“The challenge then is to keep costs down and make something that competes at a high level, without saying ‘we need a thousand people for a new IP!'”

The project has been created through Ubisoft Montreal’s ‘internal entrepreneurial initiative’, the set-up that produced Patrick Plourde’s fable-like RPG Child of Light. Staff are encouraged to pitch new ideas to the company during their downtime between AAA projects.

Hutchinson’s project may have been greenlit, but there’s still a distance to go before it’s a confirmed production. The pitch must pass the approval process of Ubisoft’s Editorial Team, who are known for being heavily stringent.

“There’s different pressures on these sorts of projects, but at least at the moment we’ve got the OK from the studio to try something new,” he said.

“Hopefully you’re back in a year and I can show you. It won’t be finished in a year, but the aim is [to show it].”