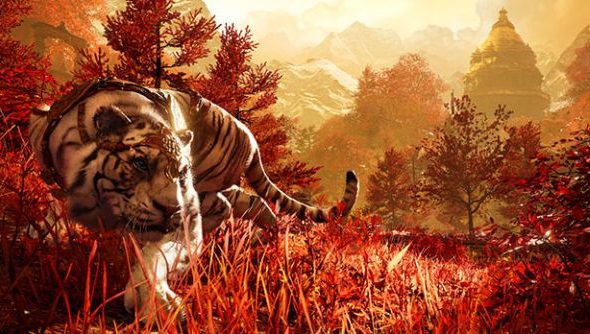 If you thought Far Cry 4 was just more men with guns embroiled in a savage civil war, you’d only be half right. Outside of Krayt lies the majestic land of Shangri-La, but it’s a land that’s under captivity by an evil demonic force.

Here you’ll toss aside your boomsticks, instead opting for a more natural attire of dagger and bow. And with the help of powerful ancient guardians – notably that of an armoured white tiger – you’ll help cleanse Shangri-La one voodoo-like cultist at a time.

From a Ubisoft blog post by communications specialist Anne Lewis, we manage to get a sneak peak into what we can expect in a typical outing into the depths of Shangri-La.

“Spread across Kyrat, players will discover five of these thangkas, which Ajay can meditate on and enter Shangri-La in order to experience the story of the legendary warrior Kalinag.” said Lewis. “As the story goes, Kalinag was sent by his king to find Shangri-La, and upon finding it he quickly realizes he was not the first to do so. Shangri-La is under attack, and with the help of its protector – an armored white tiger – Kalinag will cleanse the land of the mysterious (and demonic) forces of the Rakshasa.” 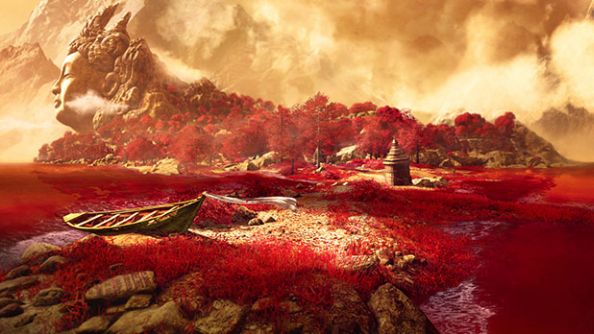 Shangri-La is no place for modern technology, so you’ll instead be given primitive weapons to play with. But these seemingly normal weapons have unique magical traits of their own to spice things up. “Here in Shangri-La, I have shed the high-tech tools of Ajay Ghale and picked up the more primitive and mystical weaponry of Kalinag.” explained Lewis. “I am now armed with a simple knife and a bow capable of slowing time – an ability that was especially handy as I moved deeper into Shangri-La and was quickly overwhelmed by the speed and number of enemies. I’m also aided by an otherworldly tiger who will defend me against attack as well as hunt down anyone I set him on.”

Along her journey, Anne met three unique enemies of the Rakshasa. “The Lurker is the most basic; armed with a bow and the ability to summon dog-like creatures that explode when they get too close to us, the Lurkers are relatively easy to dispatch.

“The Butchers provide a much different challenge, as they can teleport themselves mid-attack and sneak up on us from a different direction.

“Finally, there are the Scorchers, the most difficult enemy I faced in Shangri-La. Creative Director Alex Hutchinson pointed out that these enemies are “arrow sponges” and I wouldn’t be able to take them down in my normal fashion. This is where the tiger is particularly handy. Once I sent him after the Scorcher, I was able to creep around my target and perform a takedown from behind.” 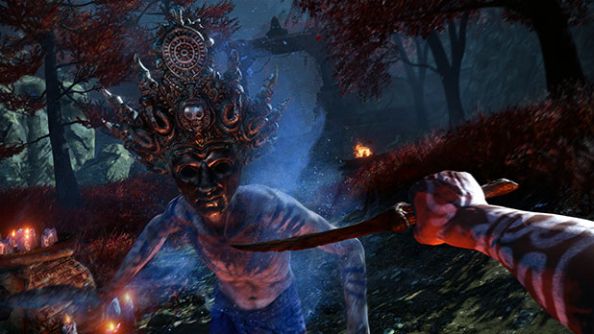 The environment of Shangri-La is naturally quite beautiful, but that’s not to say it doesn’t have its own dark and morbid secrets. “Even in the short time I spent in the world, I could see the destruction they had wrought upon [Shangri-La].” stated Lewis. The majestic temples are stained with the blood of the beautiful white animals that live there. The disemboweled creatures strewn across the ground could either be a sick offering or simply vicious bloodshed for its own gory sake.”

Although it’s an entirely different area to most of Kyrat, your deeds in Shangri-La will have an effect on Kyrat as a whole.

“Shangri-La is its own entity, but its effects carry over to Kyrat. As you complete missions in Shangri-La, you’ll unlock new skills in the main game.” Lewis explained “But beyond the gameplay, the Shangri-La levels will also give you more insight into the main story of the game, as interesting parallels are drawn between Ajay and Kalinag. By the time you complete the legend, you will know more of the backstory of the game and be more aware of what people in the main game are referring to when they mention these stories.

“Though Shangri-La itself is surreal and fantastic, the desire behind it was to make Kyrat a more concrete place, one steeped in its own past and beliefs.”