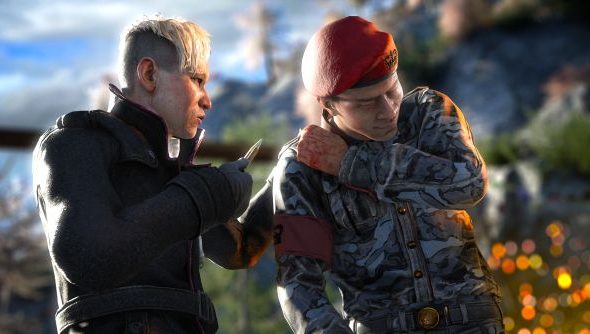 Ubisoft have sent a handful of Far Cry 4 players messages in the last few weeks. Not to ask them to deliver any ashes, or guilt them into liberating a put-upon Himalayan country, but to inquire as to where they’d like the next Far Cry game to be set. How about a “Jurassic Park style” dinosaur island? Or the Spaghetti Western-era Americas?

The questionnaire, sent on to Eurogamer, lists a handful of settings you might imagine as the foundations of Far Cry’s next numbered sequel: a visit to the cocaine trafficking jungles of Peru; a trip to the Vietnam war in the late ‘60s; a return to the fantastical world of Shangri-La from Far Cry 4.

Others are battier and clearly intended as off-year entries: a Far Cry where you can “fight against or join” vampires, a futuristic sci-fi planet, or the direct Blood Dragon sequel we were told not to expect.

And elsewhere on the survey were a raft of pitches already well covered by the fast-expanding open world genre on PC.

Any Far Cry game set “during a zombie outbreak” will join a very busy subgenre. And as for a Far Cry game set in a “Mad Max style” post-apocalyptic world? Er, Avalanche’s Mad Max will do nicely.

Any of these potential Far Cries take your fancy? Any of them really, really not?