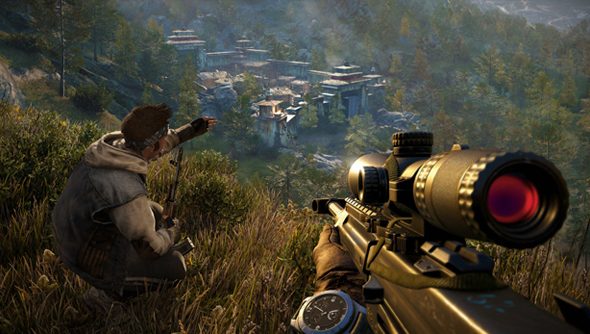 There’s a feverishness to Far Cry that seems to seep from the games into the Ubisoft staff making them. Executive producer Dan Hay has been working on the series for three and a half years, and has finally reached the Heart of Darkness. Or should that be Far Cry 4’s Shangri-La?

“You get to this point in the game where you leave the dev behind and become the player,” he intones.

There’s a little of that madness in the footage below.

Watch as an elephant throws a man from his trunk into the air in slow-mo, and a player picks the flailing sucker out of the sky with a shotgun blast.

The base assault stuff is classic Far Cry – but find pieces of tapestry and you’ll open portals to ancient Shangri-La, where you’ll play as a long-dead warrior with far-fetched abilities.

“We’ve created this legend,” enthuses Ubisoft Toronto art director Joshua Cook. “It’s one of the legends of the land.”

Yup, they’ve definitely lost it. But that’s how you know it’s going to be a good Far Cry game, right?