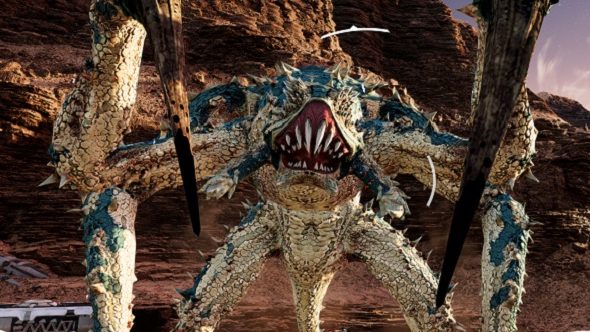 While Far Cry 5 had you fighting religious zealots, Lost On Mars’ enemies are only slightly less frightening- giant alien arachnids. Gameplay details have been detailed in a new trailer for the game’s second piece of DLC, ahead of its launch tomorrow.

You’ll able to blast these multi-legged freaks with a variety of martian weapons that mostly resemble conventional guns, pistols, rifles, shotguns etc., but with reloads swapped for cooldowns. Sure to raise a few eyebrows are the exotic weapons like the Power Glove, which stuns enemies with an electric blast and the Morphinator, that allows you to transform enemies into explosive cows(!). For those who enjoy indulging in the silliness there is also the Chicken Egg, which spawns explosive chickens. It turns out Martians are totally OK with animal cruelty.

If shooting things is your bag, check out our best FPS games.

Much like Far Cry 3’s Blood Dragon spin-off, which transported players to a neon-drenched alternate reality terrorised by radioactive lizards, Lost on Mars ditches the main game’s semi-serious tone for all-out goofiness. You play as Nick Rye (a companion character in Far Cry 5), who is beamed up to the red planet, and tasked with stopping the alien threat. Your mission-givers are a disembodied head and a sentient AI, because why not?

The new jetpack gadget gives you some much-needed extra mobility in the low-gravity environments, letting you get behind enemies to zap their weak spots. The Space Jets also help you bypass what some players find to be one of the more tedious aspects of the Far Cry series (and indeed most Ubisoft games) – climbing towers.

The DLC is available as an add-on purchase for Far Cry 5, or as part of the Far Cry 5 season pass ($29.99 / £25.99 / €29.99) which comes with Hours of Darkness, the Vietnam-set expansion which launched last month, and Dead Living Zombies, which is slated for August. Customers who have purchased the season pass will also get Far Cry 3 Classic Edition, which looks to be unchanged from the 2012 original.

The assets from Lost On Mars will be free for all players to download in Far Cry Arcade.