Despite receiving a patch shortly after release, Far Cry 5 is still riddled with bugs. While some are just downright aggravating, others are pretty entertaining and even helpful – I passed the John Seed showdown because a glitch made him fall out of his plane. Let’s take a look at five of the best (worst) bugs.

Here’s why Far Cry 5’s story is undermined by the introduction of Bliss.

Typically, you can’t swim upwards. Gravity prevents it, and developers tend to honour this scientific fact. So it seems odd that this player found himself doing a brisk breaststroke up a waterfall in Hope County.

Some games have credit reels so long, they feel like they may never end – Fable, for example. For some unfortunate Far Cry 5 players this has been literally true – they’ve become stuck in a never-ending credit roll. The bug tends to appear for those who have completed the game, instead of being allowed to resume exploring Hope County, the credits just start all over again.

Hello darkness my old friend… Well, it’s less of a friend if it’s permanent, more like an unwanted squatter who eats all your quavers. Countless players have reported being stuck in never-ending night-time, thanks to a bug that breaks the day/night cycle. There’s currently no official fix, but some have found triggering a cutscene helps with the glitch.

Nick Rye is a stellar guy: pilot, ally, doting father and husband – but sometimes you can have too much of a good thing. That’s the case with double-characters making appearances in Far Cry 5. 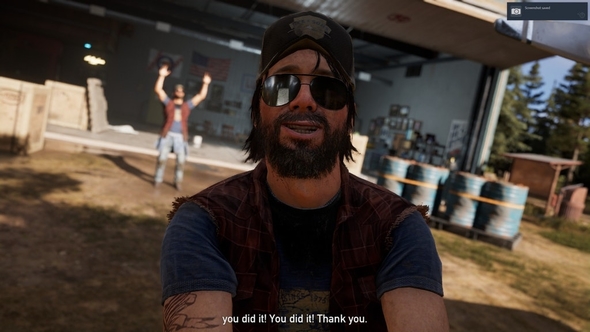 Though this glitch may be annoying to many, it’s also pretty funny. Some players have found a bug with flatbed trucks, which sees them ultimately freaking out and flying either into space (if you’re lucky) or into a wall (if you’re less lucky).