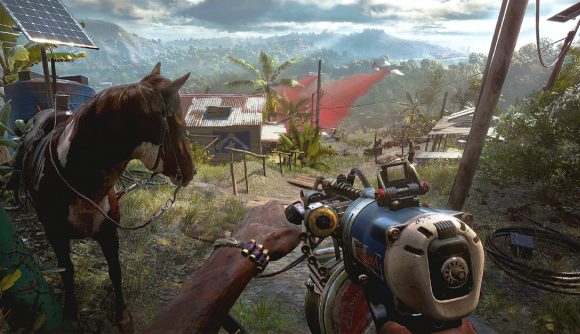 Far Cry 6’s release date of October 7 is fast approaching and, in a recent interview with Wccftech, Ubisoft 3D team lead programmer Stephanie Brenham reveals that both ray tracing and AMD’s FidelityFX Super Resolution (FSR) will be PC exclusive features, while console versions will forgo both to prioritise a 4K/60fps performance target.

Brenham explains that the team’s decision to employ hybrid ray traced reflections, using both DXR (DirectX Raytracing) and SSLR (screen space local reflections), allows them “to support DXR even on mid-range hardware. This way players can enjoy ray tracing in scenarios where it’s impossible to use SSLR due to technology limitations.”

While the attempt to have wider support for DXR across both the best graphics cards and lower-end hardware is admirable, it doesn’t necessarily reflect in Far Cry 6’s system requirements. Ubisoft kindly gave resolution and performance targets alongside its component lists but only offers guidance for ray tracing at 1440p/60fps and recommends the pricey and hard to find Nvidia RTX 3070 and AMD RX 6900 XT.

Elaborating on the implementation of AMD’s FidelityFX toolkit, namely FSR, Brenham explains that Far Cry 6 will use a “custom denoiser” for its ray traced reflections and shadows. They also said that “FSR is a feature we developed in partnership with AMD for PC”, which may suggest that we won’t see Nvidia’s competing DLSS solution implemented into Far Cry 6. However, those with an Nvidia graphics card looking to boost fps won’t be left out as both team red and team green hardware supports FSR.

On the topic of SSDs, which while practically a mainstay in modern gaming PCs are brand new to next-gen consoles, Brenham described the benefits offered by them as, “a different paradigm compared to older console’s HDDs.” We’ll need to wait and see how Far Cry 6 performs on an HDD, with the game’s system requirements explicitly recommending an SSD, but it should perform well enough especially with last-gen consoles using them as well.