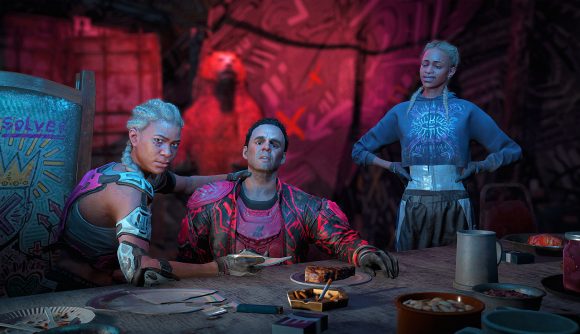 Early sales reports suggest Far Cry New Dawn is having a rough time at retail. Sales are down significantly over both the game’s direct predecessor, Far Cry 5, and the previous spin-off, Far Cry Primal. These early figures purely count physical sales, but with the direct comparisons against previous titles looking so weak it seems that Ubisoft is running into Far Cry fatigue.

New Dawn’s first week sales are down 86.5% from last year’s Far Cry 5, as GamesIndustry.biz reports. You wouldn’t expect New Dawn to do quite as well as a full, numbered game in the series, but it’s also sold just over a quarter of what Primal did in the same time frame. These are purely sales at UK retail, where New Dawn sold 60% on PlayStation 4, 39% on Xbox One, and around 1% on PC – as you’d expect without digital units accounted for.

While increasing digital adoption certainly means physical sales are less important than they used to be, that adoption hasn’t increased enough over the past handful of years to explain Far Cry New Dawn dropping this hard against its predecessors. One possibility is release date – New Dawn launched on a Friday instead of the Tuesday of the previous games, so there’s less time for those sales to accrue.

Even with all that in mind, New Dawn still topped the charts this week, just ahead of Metro Exodus. Even though Exodus is behind a disappointing New Dawn debut, it’s still up 50% from Last Light in 2013 – though with these being physical retail sales, you can probably attribute that to a higher-profile console release.

In our Far Cry New Dawn review, Julian finds that the game’s new complications add too much busy work. Other critics – as collected in our score roundup – broadly aggregate alongside our 7/10 rating, though there are a significant number of outliers both above and below that.

It’s a solid game by most accounts, though not an especially impressive one. Since Ubisoft has been building on the same formula since Far Cry 3 in 2013, it looks like we’re to the point of diminishing returns.