There are a few existing games set in the Stone Age, but not many. In reality, the only decent examples are the likes of Civilisation and Black & White, that see you move through various time periods as a means of progression, using the Stone Age as a stepping stone for future gains. Games with dinosaurs don’t count, as despite what The Flintstones tells us there’s no evidence whatsoever that humans co-existed with the giant reptiles – therefore, Joe & Mac, Turok, Chuck Rock etc are all non-starters.

Prefer your first-person titles a little more trigger-happy? Check out the best FPS games on PC.

Set 12,000 years ago, in a time when mammoths, sabre-toothed tigers and men with stone-tipped spears roamed the land, Far Cry Primal is an attempt, then, to bring what has generally been an ignored time period to the forefront of our attentions.

The hook designed to set Primal apart from its franchise brethren rests in the abilities of its protagonist, Takkar. Able to tame and command the predatory animals of the world of Oros that he inhabits, your best chance of survival comes not from getting your own hands dirty but from intelligently deploying beasts that have you seriously outgunned in the armoury stakes. 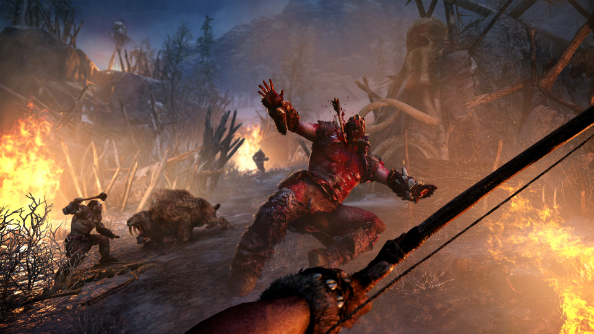 Point your cursor at an unfriendly human, for instance, preferably one guarding a camp that you want for yourself, and you can instruct your weaponised pet to turn him inside out. It might be your wolf that does the dirty work, it might be your bear – it might be any of the 17 different predators roaming the land, all of which can be brought around to your way of thinking.

Only one animal can be deployed at a time, though, so don’t start thinking that you’re going to have a whole battalion at your heel ready to charge into battle and start taking territory. These animals are powerful weapons, but they’re not indestructible, and they can’t operate effectively without your direct input.

The best tactic, from what we could derive from an hour of play, at least, is to use them as a way of thinning a crowd of enemies and, simultaneously, creating a diversion. While there are no guns, spears and arrows can still kill you from affair, so it pays to give your enemies something to think about before you make an appearance. Your four-legged friend can dispatch a single human cleanly, meaning you should use it to remove the most dangerous enemy from the battle straightaway. 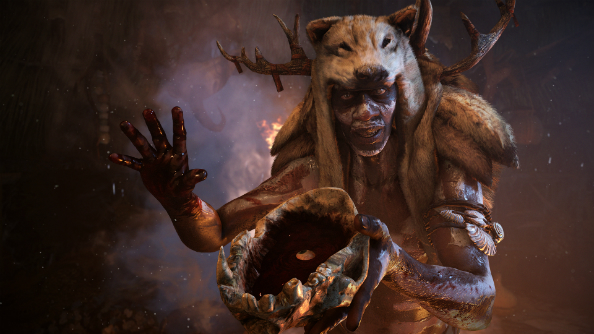 This throttling will draw the attentions of the rest, so if you’ve gotten into a smart position overlooking the camp you can score some easy kills from behind with your bow and arrow. Once there’s only one or two threats remaining it’s normally safe, with support from your wolf/bear/whatever, to barge in and finish the job with your club. A flaming club if you want to be as dramatic as possible.

Without firearms, the pace is very different to that of Far Cry 4 – not least because it’s incredibly difficult to recover from a comprising position should you reveal yourself too early or miss a shot from your bow. Without an assault rifle and/or grenade launcher at the ready your mistakes are punished severely. Pre-planning, then, feels more important than it’s ever been in this series – not only in order to complete a task with ‘perfect’ stealth, but to complete the task at all.

What those tasks are, aside from liberating camps and earning the ability to fast travel between them in the process, is largely unknown at this point. The demo we played was stripped of much of what’s promised in terms of core missions and primary characters. A couple of short quests – one involving hunting wild boar, the other rescuing a hostage – were available and they play very much using the same tones we’ve come to expect, but any hint as to their context within the grander narrative is being kept under lock and key. 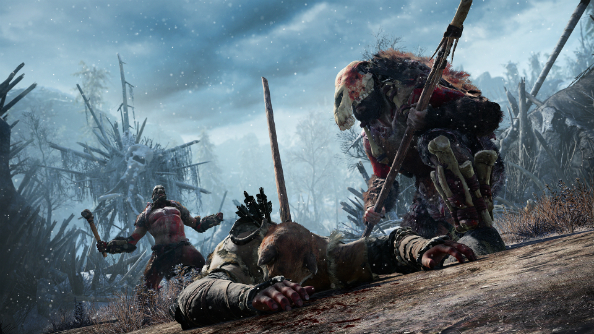 Side-missions were available, though, popping up seemingly at random as we made our way through the world and its structure of forests, wide rivers and rocky outcrops. Typically these involved saving one of the friendly inhabitants from a gang of the unfriendly kind, with too much delay or commotion leading to the captive being killed and our own personal failure.

It’s here Far Cry’s trademark domino-effect was most evident. Coming across these tasks occurred within areas teeming with wildlife acting on its own accord. Best laid plans were ruined when a deer ran straight through the group we were flanking, a tiger of some sort sprinting after it. Within moments the hostage-takers were throwing spears at the tiger, the tiger was turning its attention to its human aggravators, the deer got away without a scratch and our wolf was darting into battle… presumably because the tiger had gotten too close and its instinct (read: programming) to protect us had kicked in.

The fact that it was night, near pitch black under the blanket of trees, didn’t help in our attempts at rescuing the situation. 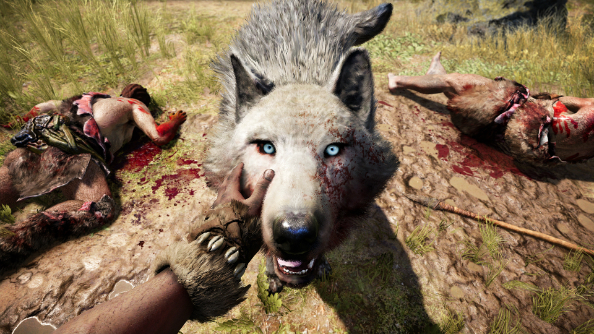 Primal is going to live and die by the quality of these unforeseen activities. If they’re too common then they’re simply going to become annoying, causing you to not want to set foot in potentially crowded spaces for fear of not being able to intelligently act and react to the madness you’ll come to expect. If they’re too rare then they’ll not play any part in your planning at all, ridding the game of that unpredictability that its design team is surely relying on to create intrigue.

One means of reducing the shock factor is to send your owl into the air. The owl is your scout, gliding above the world and able to trigger a ‘hunter vision’ overlay that highlights any points of interest in luminous yellow. This way you can get a sense of which animals lay ahead that might be best avoided, as well as any enemy hunting parties that are nearby. If you choose to you can also have the owl swoop in and take a single life without putting yourself, or your land-based allies, at risk. 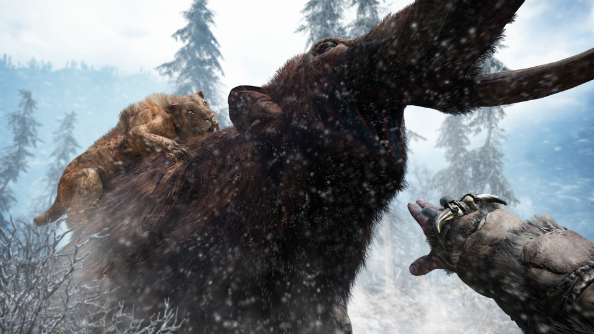 What we’ve played is really designed to show off the mechanics on offer, absent of any hint of narrative or cohesive progression. Other than the fact that he’s capable of taming animals, we know nothing about Takkar, where he comes from or why there are people he considers enemies sharing the same land as him.

Open-world games are difficult to get right at the best of times. Those featuring complex systems of hunters and hunted, acting independently of the player, are even more taxing to deliver in a way that is both engaging and fun. Primal has a lot of ideas that it needs to bring together in order to deliver on the wider vision and the fantasy of playing as a pre-historic human in this frontier environment.

For the sake of the setting, here’s hoping Ubisoft get it right.