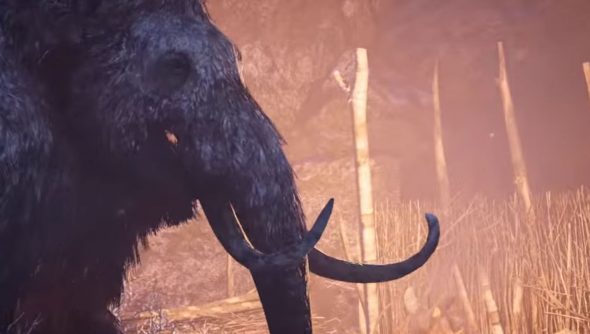 Rarely has a headline of mine captured what the rest of the forthcoming news story is about to say quite so well. But I’ll nevertheless indulge those less keen on brevity. Players who pre-order Ubisoft’s upcoming survival open-world Stone Age-set FPS will be gifted DLC that lets you get off your head on a medicine man’s potion and ‘become’ a mammoth.

Don’t do drugs, but do do our list of best upcoming games.

In the absence of PCs and phones and tablets and abacuses, having fun and/or escaping reality in the Stone Age takes a much more organic route, if the latest Far Cry Primal trailer is anything to go by.

“Each sip gives new spirit journey,” says the witch doctor in the trailer below, before offering up the offending poison. “May be you dance in the clouds. Or become a beast!” The latter it is, then, which results in this:

Legend of Mammoth is a bonus DLC pack that gives you access to three pre-order exclusive Far Cry Primal missions. Here, you’ll assume control of a mammoth battling for their herd’s survival in Duel of Beasts, Hunt the Hunters and The Trapped Elder, the total of which will amount to around 45 minutes of gameplay.

Far Cry Primal is due for release on PC on March 1, one week after its console counterpart.