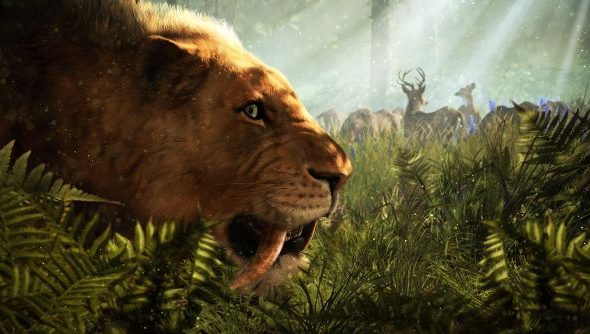 Far Cry Primal’s got another trailer, but this one’s a bit longer and has a very specific purpose – to take you from knowing nothing about the game to capable of using its every system. It turns out that they’re all mostly dedicated towards removing life from others, be it via spear, arrow or bee bomb.

Upcoming PC games: there’s a lot of them and we’re trying to keep track.

Even the act of bringing your tribe together only seems to be for the purpose of making sure they can help you kill people better. Takkar certainly knows how to sort people out.

Jokes aside, this actually answered a couple of questions for me about the way systems interacted, and it was interesting to see just quite how many ways a murder could be done. The worry with setting something this far in the past is all the usual leaning posts are gone – GPS maps, the modern medkit and its magic healing powers, guns. Ubisoft’s solution is ‘weird ancient magic’ at least a couple of times, but at least they’re imaginative.

Also, spears are really cool. As are bears that are on fire. There’s a lot of style to Primal, as far as it is from more regular game trappings, and I’m more fascinated with its world and the people that inhabit it than I have been for any of the other games. I do worry that it will lack an antagonist that feels quite as evil or threatening as those that headlined previously, but it’s a sacrifice I’ll take to hang out with a sabretooth.

Game’s out on PC March 1st, a week after its console debut. Hopefully the delay means a flawless launch.