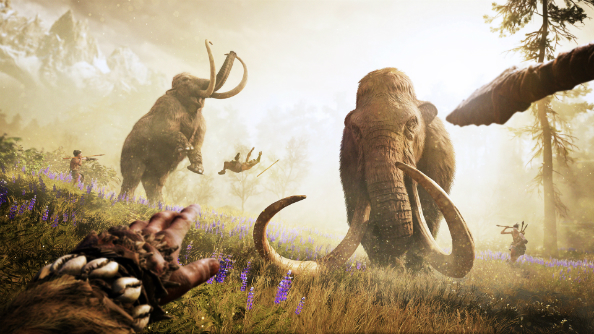 Are you partial to cavemen/hooded hitmen/terrorist-pummeling tacitcal squads? Super. You’ll be thrilled to learn Ubisoft’s weekend Steam sale offers bumper discounts on the Assassin’s Creed, Far Cry and Rainbow Six franchises. There are also big savings to be had on the likes of South Park: The Stick Of Truth, Child Of Light and The Crew. Sadly, a certain chart-conquering New York shooter hasn’t quite been out long enough to justify some MMO savings.

Far Cry Primal takes the open-world genre to prehistoric extremes. In honour of stabbing sabre tooth tigers, why not read about the best sandbox PC games.

Here are some of the juiciest deals from Ubi’s weekend-long Steam Sale, which ends 10am Pacific, March 28th:

Urge to splurge… rising. Seeing as I’ve currently got 97 games sat in my Steam library, I should probably give this one a miss. What about y’all, though? Do any of the French-flavoured deals above tickle your fancy?