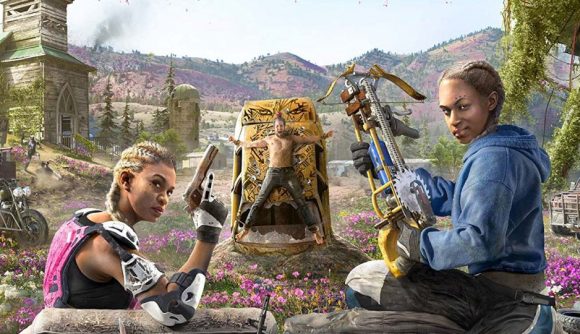 December 6, 2018 The box art for the new Far Cry game has leaked ahead of the Game Awards announcement, revealing it as Far Cry: New Dawn.

Ubisoft was all set to reveal the latest instalment of the Far Cry series at the Game Awards, and it seems everyone wants to spoil the surprises. First Ubisoft themselves did, with a teaser trailer showing that a new Far Cry project was on the way – which would be properly announced at The Game Awards. Now a leak of the game’s Xbox One cover art has popped up on Twitter, revealing the new game’s title as Far Cry: New Dawn.

The title suggests a flip of Far Cry 5, where the player was part of the resistance against the New Dawn movement. It’s entirely possible that this time, players will join the revitalized movement – although presumably it will seem less like a religious terrorist organization if we’re being asked to take part in it.

We don’t know if Far Cry: New Dawn is a full sequel or a smaller spin-off, but both the box art and the teaser trailer released by Ubisoft does give us the basic details. Whatever form the new project takes, Far Cry is going post-apocalyptic.

You can see the full Xbox One box art below, as posted by user Wario64. It shows a few familiar locations, as it seems to mirror the original cover art for Far Cry 5 – the church on the left, especially.

As for the teaser trailer below opens with a picturesque farm and a voiceover saying “none of us were ready for the end.” Then a mushroom cloud erupts in the background and we’re treated to seens of fire and destruction as the voice laments a world “turned cold and dark.” Then some hints of a nuclear winter, a post-apocalyptic desert, and finally “a new world in bloom.” The trailer’s closing shots show someone picking through fields of flowers for bits of scrap, using them to construct what looks like a buzzsaw-flinging slingshot.

A full reveal for the game will come among The Game Awards announcements, though exactly what form it’ll take remains to be seen. Previous Far Cry spin-offs have gone weird at various scales, like Blood Dragon’s bite-sized take on the 80s or Far Cry Primal’s more fully-featured trip to prehistory. Ubisoft’s press release refers to this as “a new Far Cry game,” but offers no other details.

The barn in the opening looks very much like a part of Far Cry 5’s fictionalised Montana, and that may suggest we’ll see the existing map heavily dressed up in a re-bloomed post-apocalypse. That’d put the scope of this project right in line with Far Cry Primal, which made use of a heavily edited FC4 map to serve as its basic setting. The weapon construction shown also suggests we’ll have a big emphasis on scrounging and crafting.

If the trailer embed above doesn’t work, you can find a mirror here. Whatever form Far Cry: New Dawn takes, our upcoming PC games list will get another entry in the Far Cry series very soon – not to mention the myriad other titles due to be announced at The Game Awards tomorrow night.