Blood Dragon is a standalone Far Cry 3 total conversion available to download on May 1st. It’s an explosive parody of 80s sci-fi action movies and videogames, a neon-infused send up of the likes of Terminator 2 and Bionic Commando that also pokes fun at modern FPS tropes. It features a silly, laboured tutorial, an overly macho cyborg protagonist, an overbearing AI sidekick and a blacklit island terrorised by giant lizards who shoot lasers from their eyes. It’s stupid, but a very enjoyable sort of stupid.

Blood Dragon plays much like Far Cry 3 did, with identical stealth mechanics, rising detection meters and chainable single-button takedowns. Instead of throwing pebbles you chuck a 20 sided die — I guess because D&D was popular in the 80s? I’m not sure — you can instakill another enemy after a takedown by throwing a shuriken, there are garrisons to liberate and bonuses for killing enemies in interesting ways. Even some distinctly non-cyberpunk weapons have been transposed into the cyberpunk world, such as the original game’s bow. 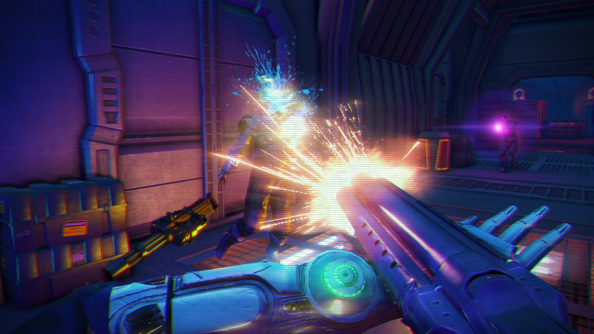 Similar too is how wildlife can be used against human and cyberhuman foes alike. Blood Dragon is still an open-world game and allows you to approach garrisons as you desire. You can loot cybernetic hearts from enemies and throw them to draw the attentions of the 20 foot tall titular lizards towards enemy strongholds. These bases often employ anti-lizard shields which keep the dragons at bay but do nothing to protect them from their long-range, destructive laser fusion eyes.

You’ll level up too, with each new tier offering you either an additional health slot or a new ability. At higher levels you’ll be more efficient at triage, either reassembling your robotic arm or squeezing a super manly hand grip excerciser. There’ll be other creatures too. The only wildlife on show during the short hands on session was the blood dragon itself, though the pack of collectible trading cards Ubisoft were handing out at the event mention something called a Black & White Tiger, and the later skill tiers reduce the damage you take from wild animals. So expect there to be some variety in the fauna you encounter. 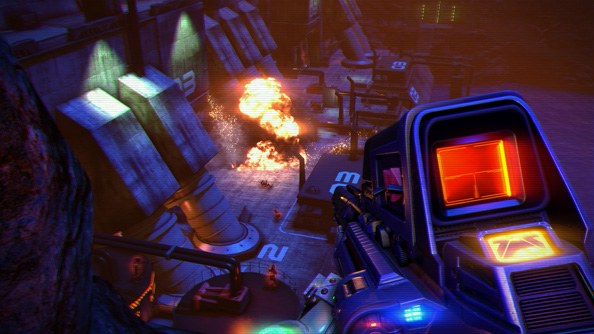 Liberating garrisons is near-identical to liberating enemy bases in Far Cry 3. Guards come in different flavours — snipers, firebomb throwers, heavies and so on — and will activate alarms to call in reinforcements if you’re spotted. Weapons like the Fazertron and the Kobracon fill in your basic assault rifle, pistol, sniper rifle and shotgun slots. To anybody who’s played Far Cry 3, this game’s combat offers little in the way of surprise.

But while “so bad it’s good” is what the eight hour long expansion strives for, in some places it’s just bad. In its writing, Blood Dragon doesn’t feel as confidently self-aware as the base “kill your dick” vulgarity of a similarly genre-mocking Bulletstorm. In the trailer an incongruous profanity derails the otherwise clever pastiche of retro cartoons. It recycles jokes as fast as you can read them (you’ll raise a smile at an overly specific description of a crouch, but your face will slacken at the almost identical descriptions for other movements that follow). The laboured tutorial can’t help but slip in some actual tutoring. A homophobic gag in a helicopter flies well over whatever macho mark Ubisoft were trying to hit.

Blood Dragon throws a whole lot of writing at the wall. It satirises genre tropes before marching you into a tiresome escort mission, which in the game’s defence is probably meant to be ironic on some level. The problem is, it’s difficult to parody the worst parts of shooters without having those parts right there inside your game, stinking the place out. It’s difficult to know what expression you’re supposed to make while playing it. 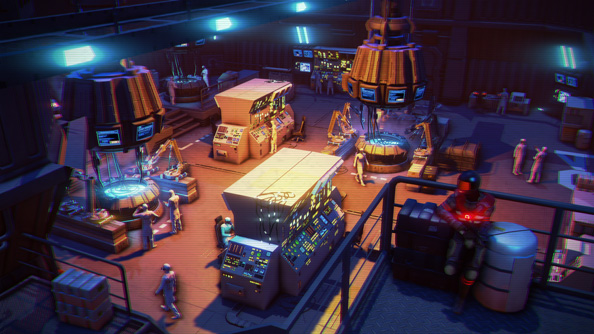 That’s not to say that Blood Dragon isn’t fun to play. The shooting is just as enjoyable as base-busting in Far Cry 3, the Megadrive-era cutscenes alone will keep you pushing through missions, the 8-bit soundtrack is synth drum bliss and it looks uniquely sublime too, all scanlines, chrome and bleeding colours.

It’s fine to embrace the stupidity of 80s action movies, just don’t expect Blood Dragon to subvert a single thing. From what’s been shown, it really is as brilliantly dumb as it looks.