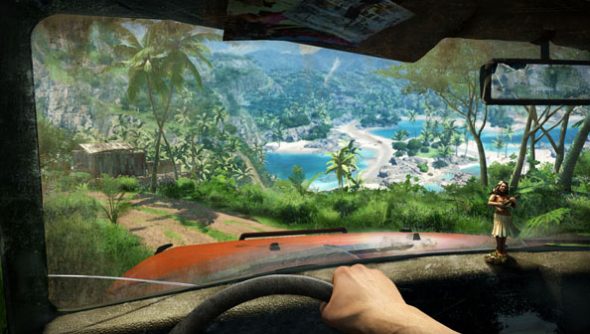 I’ve been playing Far Cry 3 on PC for the last couple of days now, and I’m astonished. It’s a brilliant game, an open-world first-person shooter that hasn’t stopped surprising me.

Crocodiles are worse. There you are, picking little blue flowers to make a syringe of tasty drugs and one will leap at you and try to bite your arms off.

It’s got everything I’ve wanted in an FPS since Half-Life 2. A vast open world that’s ripe for exploring. Meaty weapons. Astonishing character acting. A great baddy. And, best of all, angry animals.

GOD DAMN WHAT THE HELL BEAR.

It starts with a baddy and a bad situation: Vaas Montenegro. Vaas has captured you and your chums. They’re all perky Californian slush fundies: twenty-somethings with enough money to afford skydiving and adventure holidays on deserted islands.

But the island isn’t deserted. In a brilliant introduction, it’s revealed that the island has been hijacked by Vaas and his pirates. And they’re ready to kill on a whim – for kicks, for laughs, or just because they’re plain bored.

Without question Vaas belongs in the pantheon of brilliant PC gaming villains. I’d put him alongside Wallace Breen, Diablo, Jon Irenicus from Baldur’s Gate 2. Any day. He’s hyperactive, violent, and ever so slightly effeminate. Clearly motion captured, his performance throughout the game is stunning – you can feel the fury and rage bubbling over his expressions; but also his sickened sense of amusement at your predicament. He’s a monster; and he’s one of the few monsters in games you can feel afraid of.

But he’s also the perfect foil for Far Cry 3. This is a game in which you’re given more guns than you can carry, and a vast island to explore. What that triggers in the player is a desire to create and force chaos. When you’ve got a bow and arrow, explosives, a flamethrower, and an endless supply of jetskis and assault rifles, a player’s only reaction is to cause chaos. What’s interesting about Vaas is that he’s even more mad than the player; even more violent, and even more distractible. So: about that island.

It is simply stunning. Far Cry 3’s set on a tropical island – well, more of an archipelago, like the very first Far Cry game. It’s also an open world, where you’re free to mosey and explore at your own pace. There are broad objectives, alongside exploration led goals. The main thrust of the plot: save your friends and get off the island, guides you, but you’re mostly free to figure out what to do yourself. Extraneous activities include clearing camps of baddies, stealing loot from lockers and chests dotted in every cubbyhole, reactivating radio masts (Far Cry 3’s analogue of the towers you climb in the Assassin’s Creed games) and crafting.

Crafting is key to understanding why Far Cry 3 works so well. The game is seething with life: from dewy little deer things, to angry bears and territorial crocodiles. And plants. Never forget the plants. Combining the skins of dead animals together means you can carry more cash, (ooh, lovely snakeskin wallet you’re carrying there), more weapons (lovely leather rucksack) and everything in-between.

Meanwhile, you’ll consistently earn XP for kills – both human and fauna – and points earned from levelling up will unlock new abilities or buff your character. Skill plays a part in increasing your XP: you’re rewarded for silent takedowns and headshots, and for other skill moves. Very quickly, you’ll discover you’re able to leap from a tall building, skewer a man on your machete, duck, roll, headshot, then pop a syringe to highlight every baddie in the vicinity. Combat… flows. And occasionally, it becomes ridiculous.

The situations Far Cry 3 throws at you are just hilarious. Releasing an angry Emu so it pecks your enemies to death. Driving through a full-scale firefight on an ATV while delivering medical supplies. Sneaking into a camp to assassinate a leader, but leaving chased by Komodo Dragons. Having drug induced sexy times. With a lady!

That’s the final part of the puzzle. It’s a mature game: there’s a delightful NPC friend who’ll fill your boots with magic mushrooms. There’s a slightly baffling subplot about your latent mystical abilities. And more: more that I’m keen not to spoil.

That’s what I love about Far Cry 3, really. It’s surprising. Surprising and clever. It has vast ambition, but it understands that nothing works in a shooter if the basics of shooting and fighting don’t feel right. Its scale is enormous, but you could throw a rock in any direction and discover something new and exciting. It is fast, fluid and violent, but often in pursuit of crafting new wallets and handbags.

Most of all though, it’s mad. In my opinion, it’s the year’s best shooter.

Here’s a playlist of our favourite, mad Far Cry 3 videos…