Three years ago, Giants Software hosted a small Farming Simulator tournament at AgriTechnica 2017. Thinking it might be a fun community experiment, the team was pleasantly surprised to find an overwhelming amount of interest from potential competitors and non-competitors alike. The enormous positive reaction caused the company to begin pursuing competitive Farming Simulator in earnest, increasing its presence at the annual FarmCon, which was itself growing year-on-year.

Experimenting with various game types and tournament formats to gauge interest and find what works, they settled on a major gameplan to launch at FarmCon 2019. This resulted in the announcement of the Farming Simulator League – a season of officially organised and sanctioned tournaments that will stretch from 2019 and into FarmCon 2020. With a $250,000 prize pool and a ten-event calendar, it may seem like a heady investment to onlookers with no proper exposure to the series, but for Giants and the Farming Simulator fanbase this is the kind of venture they’ve been waiting for.

“We started thinking could we have a bigger competition,” Farming Simulator’s esports and community manager Lars Malcharek tells me. “So we had some more tournaments and just tested the waters, basically, and it was just insane. Players loved it, the company loved it, and a lot of sponsors loved it as well.”

Some footage of the competitive hay bale stacking at these Farming Simulator Championships is viewable online. They aren’t filling stadiums like League of Legends, sure, but the community is diehard – a large part of that stemming from their closeness to the game’s subject in reality. 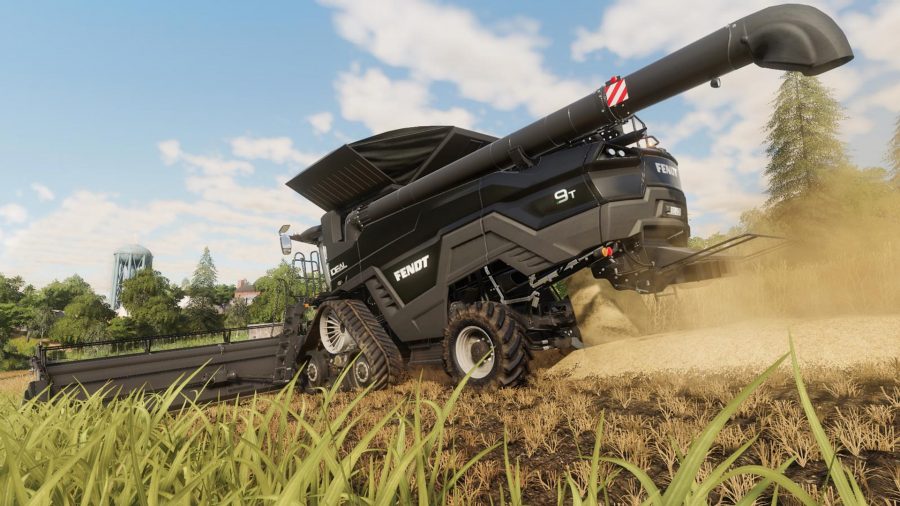 “[Our players] are dedicated not only to games and to Farming Simulator but also to farming. There is this connection between real life and our game that you don’t get too often,” Malcharek explains. “We’ve a lot of people who love everything farming. And that’s good and bad at the same time, because of course they love our game, but they also nitpick on everything because they love it so much.”

The game speaks to bona fide farmers and those who grew up around it, kindling nostalgia and allowing people to feel a part of the rural lifestyle without actually moving. While the game’s simulation is robust and getting better, it’s the openness for modifications that have allowed it to truly flourish.

Hailing from a small forestry town in British Columbia, designer Jordan Chaleil has been creating mods under the moniker of FDR Logging for several years. Starting with Farming Simulator 13, it wasn’t until logging was built into Farming Simulator 15 that his work really started to take shape and gather an audience. 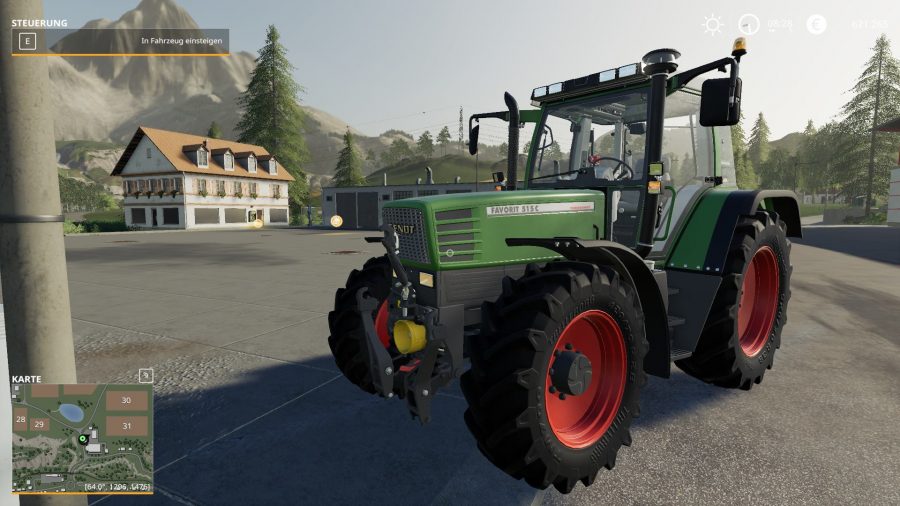 “The first mod I ever tried was something called The Forest Mod,” Chaleil recalls. “It gave me the ability to cut down trees with a chainsaw, and you could collect them and put them on trucks and that kinda thing. I come from a family of loggers and from a logging community, and the first time I played that, I was instantly hooked.”

Being a Eurocentric franchise, there isn’t a huge emphasis on agriculture outside of Europe in the series, so Chaleil has been serving a hungry niche of players with his maps and American-brand machinery. FDR Logging has now expanded to a team of five, with a YouTube channel that demonstrates their mods in ongoing Let’s Plays and promo videos, all supported by eager viewers through Patreon. 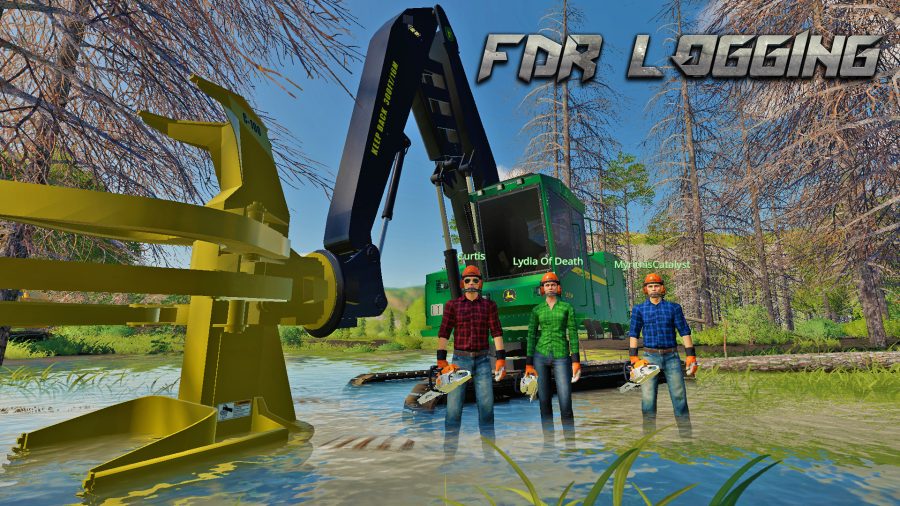 “Before we even had Patreon people were like ‘oh man, I love logging, how can I donate to you guys to help out?’. We were buying models and contracting modellers, I spent at least maybe $1500 just on models just to get it rolling,” Chaleil explains. “So when people were like ‘hey we’ll give you money!’, we were like ‘well sure, yeah we’ll take it’.”

Although the income isn’t massive – all the team members still have full-time jobs – it has made the project self-sufficient, allowing them to focus on making the best mods. Last year, they were able to bring on a dedicated modeller, making their work more distinctive and efficient.

YouTube and Twitch have been integral to the growth of Farming Simulator, as a place for creators to share the myriad ways they enjoy it and as somewhere for fans to chill out among like-minded folk. 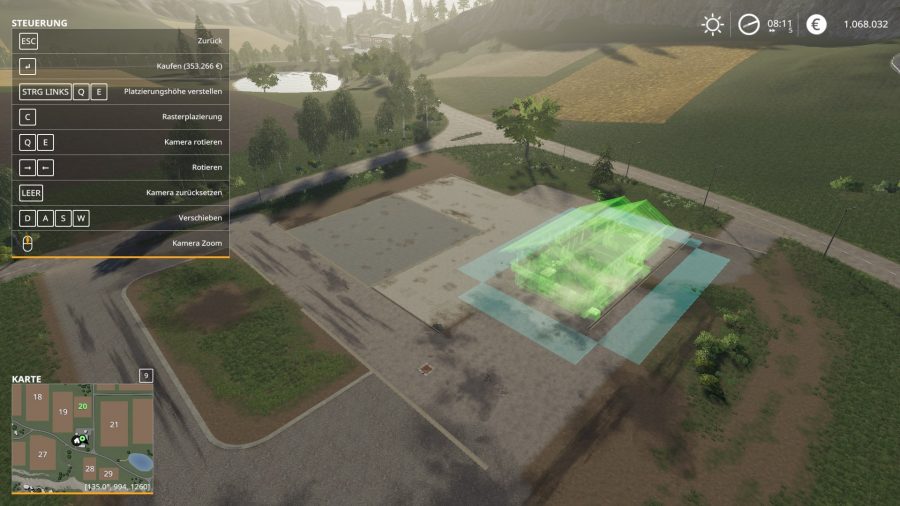 “You can relax quite a lot in our game. You still have to make difficult choices, like how to spend your money and what you want to buy next and how to be most efficient, but you dictate the pace of the game,” Farming Simulator’s PR and marketing manager Martin Rabl tells me. “What I hear often is that people play it as like a second game of the evening, so they’ll play a competitive one or where you have to react fast to what’s happening, and then in the end they’ll chill out with a half-hour or hour of Farming Simulator.”

Every farmer has their hay

Hay bale stacking is one of the many mainstays of the Farming Simulator professional scene, in which two teams of three compete to be the first to create and stack 20 hay bales. The team with the best time wins, and the official multiplayer mod is available from Giants for fun and for practice.

That malleability goes both ways, with others pushing to see what chaos they can manifest, such as when Grand Hilbert of The Squad, another Farming Simulator YouTube channel, created a makeshift survival game out of one of FDR’s maps. “He did this him versus his player-zombies thing. He made this section of our map where they put up all these defenses and stuff, and he opened the gates and let all his viewers come in and join the game,” Chaleil recalls. “They’d have to drive vehicles and try to jump over walls and get into his base that he built in order to capture him. I watched the stream, and it was one of the most unique things I’ve ever seen. People, they plough fields in this game, they tend to their cows and they log, but I’ve never in my life seen anyone do zombies. It was very bizarre.”

The team at Giants are continually amused and enthralled by the varying playstyles. Malcharek tells me about two streamers he finds particularly fascinating: the first is LSRealDrivers, who play solely in first-person with the highest difficulty settings, to get at what they consider the “realistic farming experience.” The second is Alfgo, who streams a roleplay server where players have to apply for jobs and fulfill particular requirements. “You get hired or you get fired, if you get fired, you can’t use the tractors any more,” he says, laughing. “It was hilarious, but in a good way.” 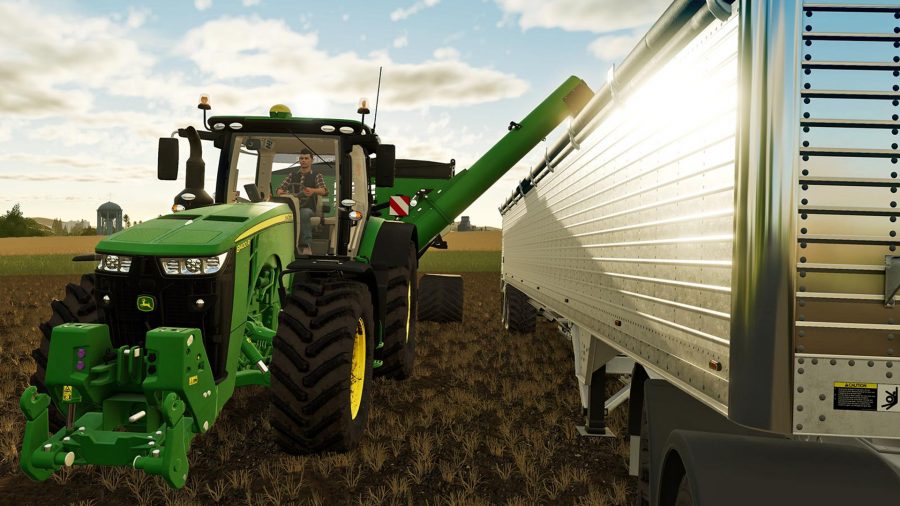 The sense of pride in the creative ways people play is palpable. Giants may be the developer of Farming Simulator, but it’s the players who are making it, whether that be in fascinating servers or by supplying mods that make the game more accessible for international enthusiasts, or content creators whose videos of the simpler life are a brief reprieve from the outside world. It goes further, too.

“I got this email from this guy who was 58 years old,” Chaleil recounts. “He was a buncher operator in Ontario – that was his whole life, his career and his passion. He got into an accident and he broke his back, and they’d never let him run a machine again, and that absolutely ruined his life.

Related: Check out our list of the best management games on PC

“He said ‘I got my wife and my son to help me set this up and I started playing and your buncher is the most realistic I’ve ever seen in conjunction to doing it in real life. I wanted to personally thank you because you brought back this thing that I love so much that I could never do again. Thank you for giving me a second chance at it’.”

Farming Simulator isn’t just a farming game, it articulates the joy and satisfaction of a lifestyle and industry that isn’t often so well represented, creating an outlet whose significance stretches way beyond being a nice way to unwind.