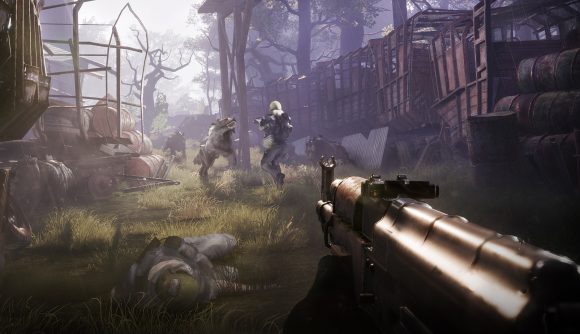 21/08/2018 Fear The Wolves will arrive on Steam Early Access on 28th August, it’s been revealed. The revised release date comes with a new trailer that shows off more variety in the ruins of Chernobyl. The full release is still slated for 2019.

The Steam Early Access launch of Fear The Wolves has been announced for August 28. The battle royale game was initially set to launch on July 18 but it appears that developer Vostok Games and publisher Focus Home Interactive needed more time to get it finished. Their decision looks to be down to a combination of player feedback given from the closed beta, and some pressing technical issues – though Vostok hasn’t been specific with what these are.

“Fear the Wolves enters Early Access with an additional six weeks of development and testing in closed beta. With game performance and balancing now refined, it’s time for Fear the Wolves to be enjoyed by an even wider audience on Steam,” Focus Home Interactive says.

Check out our top picks of the best battle royale games you can play right now.

Fear The Wolves is marketed as an intense FPS serving up classic royale-style gameplay, extractions systems and dynamic weather. Despite its delay, Vostok Games has been pleased with the reception its received from players, and ensures everyone it’ll be fixing issues encountered in the closed beta.

“The positive community feedback encouraged us to delay the release of the Early Access to ensure the well-received core experience isn’t marred by technical issues. On top of fixing these issues, this delay will also allow us to further improve other aspects of the game, thanks to the masses of data and player feedback gathered through testing”, the developer said back in July. “We anticipate that the extra development time will raise Fear The Wolves’ quality to a level at which players will be able to fully experience it’s unique atmosphere”.

Though there’s been no confirmed full release date, Fear The Wolves is due to be out in 2019 according to Focus Interactive – hopefully without delay this time.