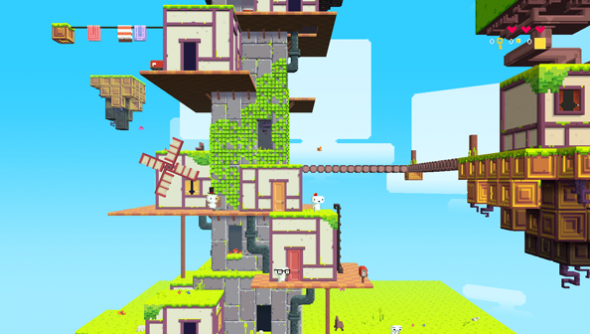 Well this is a bit of a leftfield update, but Fez, the multi-dimensional platformer from 2013, has received what its coder is calling its final patch, smartening up the game and adding a speedrun mode.

For more instant classics from small teams check out the best indie games on PC.

Update 1.12 has been in the works for a year now, according to Renaud Bédard the talented programmer behind Phil Fish’s magnum opus, bringing his total time spent working on the game up to a colossal nine years.

In wanting to be done with the project, Bédard has used this final update to fully coalesce the PC, Mac and Linux codebases, tinker with the way several visual and audio elements of the game are run and provide a requested speedrun mode for the game’s runnning community.

Adding the launch parameter –gotta-gomez-fast will now launch the game with timer split support, and players should also find easier framerates and audio playback in some high load environments such as puzzle rooms.

The full list of changes can be found here but, suffice to say, that’s probably the last we’ll hear of Fez. Phil Fish has not renegged on the cancellation of a sequel after being hounded from the internet by angry people in 2013, so yeah, goodbye Gomez, and thanks for all the work, Renaud.