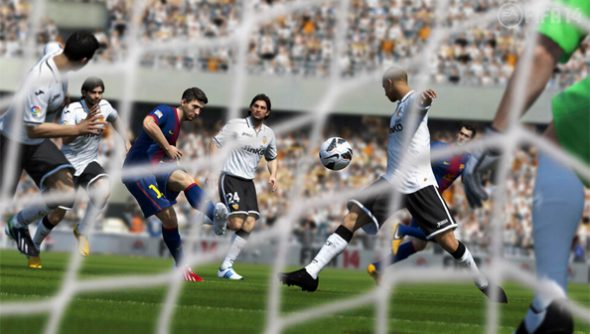 Somewhere in Burnaby, British Columbia, at EA’s oldest studio, technicians breathe a sigh of relief. They crack open beers. The ritual is complete. For another year, football is become a video game, and the Ancient Ones beneath the Earth have been placated. Life goes on.

“FIFA 14 will play the way great matches are contested with build up through midfield, tension throughout the match as chances are created, and incredible finishing,” said enthusiastic FIFA 14 exec producer David Rutter. “Opportunities in FIFA 14 will be rewarding and great goals will look stunning.”

FIFA’s not a football sim, really, but a watching-football-on-TV-and-influencing-play-remotely sim. Still, it’s quite good, isn’t it?

The last one I played was FIFA 2011 which, unnervingly, had its servers shut off at the start of this year. Will you be keeping up with the series’ online community, or giving this year’s entry a miss?