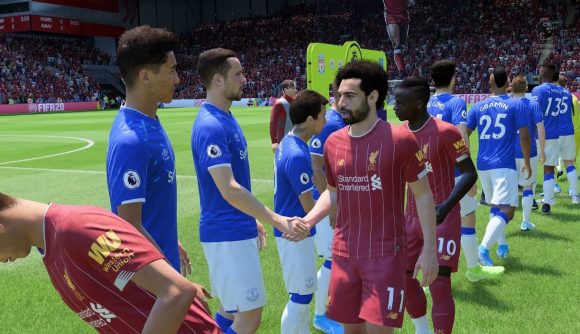 Like most other major sports institutions, the current season of the English Premier League was paused indefinitely due to the coronavirus pandemic. Soon, the league is expected to resume play, and will be using virtual audience noises and sounds from EA Sports’ FIFA in order to liven up broadcasts.

Given that large crowds are still a no-go, and will remain so for the foreseeable future, matches will instead be played in an empty stadium. Several other divisions in other European countries have been doing this, as has professional wrestling, and the overall result is a mixed bag. Without the energy of a roaring crowd, the audio devolves into a lot of heavy breathing and other sounds that are just a tad off-putting.

To remedy this, courtesy of The Verge, Sky Sports will be overlaying broadcasts with chants and what not from the FIFA games, as a way of replicating “the vibrant atmosphere of Premier League clashes.” Presumably this will mean your standard boos, cheers, and hallmark sing-alongs, like Liverpool’s ‘You’ll Never Walk Alone’, and not some of the more colorful anthems one can expect during a tight game between rivals. FIFA’s audio bank has certainly always elevated its gameplay, but if you decide you’re not into it, you will have the option to turn it off while watching on Sky.

Speaking on the use of artificial crowds, and other interactive Sky Sports features, Sky Sports managing director Rob Webster says it’s all been the subject of much discussion.

“With live sport on hold for over two months, we’ve spent a lot of time thinking about how we broadcast in new ways to bring fans together, even if they can’t meet up to watch the match,” He said. “We want Sky Sports viewers to still feel it all and have the best possible viewing experience — even if they can’t be in the stadiums or watch with their family and friends.”

Since lockdown began, sports professionals have been trying their hand against esports FIFA players on Twitch to pass the time. Our sister site The Loadout interviewed rugby pro Jack Nowell about stepping up to Manchester City FIFA pro Ryan Pessoa. The Premier League itself will kick-off again on June 17.