Looking to get started in FIFA 20 Ultimate Team? Since its full debut in FIFA 09 (or UEFA Champions League 2006-2007 if we’re splitting hairs), FIFA Ultimate Team has arguably been the most compelling mode in EA’s annual football series. In it, you trade players and complete objectives to build a dream team, taking your assorted athletes into matches against either AI or human opponents for coins, cosmetics, and glory.

If FIFA 20’s Ultimate Team is your first brush with the mode, consider this article your beginner’s guide, getting you up to speed on everything you need to know about the all-consuming multiplayer mode. That includes how to start bagging some big names early, the best way to score a quick cash injection, and what’s new to FUT.

And, what is new to FUT? We’re talking features like a refined objectives system in which you complete a range of time-limited tasks to personalise and progress your club, four new friendly match types turning football on its head, and an improved interface to make squad management even easier – no more fumbling with your fingers when you’re trying to be Harry Redknapp. So, if you’re new to FIFA 20 Ultimate Team and want to get off to the best possible start, read on.

What to do straight away

When you first start FIFA Ultimate Team, after the brief onboarding video explains the basics, you’ll need to familiarise yourself with the foundation objectives. Not only are these the best way to learn FUT’s ropes, but also how you can wangle a quick bit of coin. One aspect they teach that’s central to FUT is team chemistry.

Essentially, chemistry involves putting players who share the same nation, club, or league next to each other for a stats boost. Ensure they’re in their preferred position for even better chemistry. Remember: yellow lines linking players are good, but green is better. Other foundation objectives are as simple as changing your club’s name, applying a consumable such as a contract extension, or playing a match (you don’t even need to win it). Fulfil these foundation objectives and you’ll have a few thousand coins for very little effort.

There are two types of currency in FIFA Ultimate Team. FIFA coins are what you earn through winning matches and completing objectives. The rate of accumulation is fair, and you can build a solid team without spending real-world money. If you do want a bundle of coins without grinding for them, however, you can choose to splash the cash. FIFA points, meanwhile, are a purely money-based currency. In other words, you can’t earn them through in-game actions.

New players are, of course, what you’ll mainly be spending your FIFA coins or points on. You can hone in on a specific player by searching for them on the transfer market and either bidding for them or buying them outright, or you can buy packs of players. These provide FIFA’s most heart-fluttering moments: there’s a chance you’ll win yourself a Salah or Neymar and transform the fortunes of your club. There’s also a much, much greater chance some plodding defender from Stuttgart flops out from the pack. Thankfully, this year you can see the probability of getting a top-tier player before you buy by pressing start on the card pack screen. 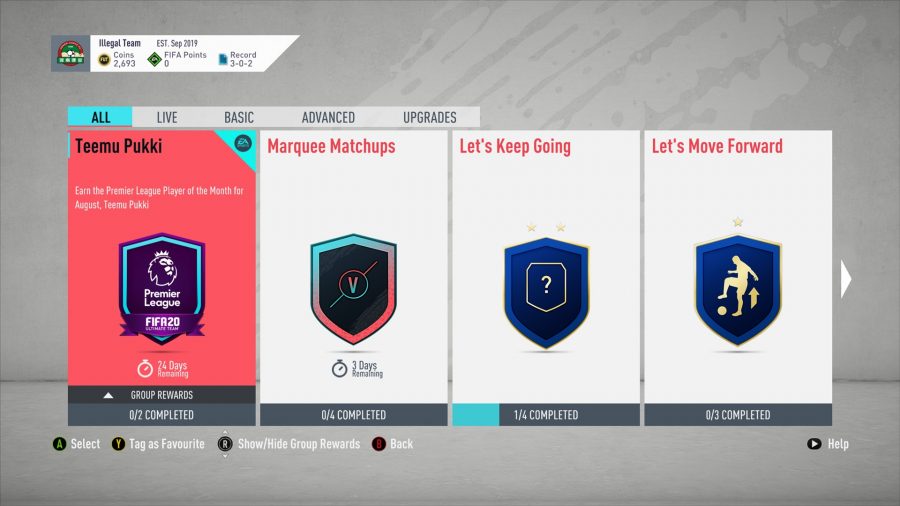 Squad building challenges, or SBC for those in the know, are essentially team-building exercises. Not the awkward office kind, but the awesome football kind. Buy and sell players to create specific teams, then submit them, and you’ll earn coins and rare cards for your trouble. You don’t get your players back so it’s the least they can do, really. There are several kinds of SBC. For instance, ‘marquee matchups’ see you construct a squad out of players from the week’s key clashes.

Get ahead of these by knowing what real-world fixtures are on the horizon and buying those players before their price jacks up. In the same way, you can look at SBC and auction players you know other people will need. There are also upgrade challenges. For example, exchange 11 bronze players for a pack with two silver players. SBC provide regular capital for your club, and make use of lesser players that otherwise wouldn’t fetch much on the market, so every card counts.

Handpick your opponents with squad battles

You’ll find a regularly updated source of AI competition in squad battles. It includes teams handpicked by high-profile players like Virgil Van Dijk (you can take on his Calm As You Like FC right now), as well as the team of the week as chosen by EA Sports, which features in-form players with adjusted stats. You’ll earn different coins and packs based on how many points you earn over seven days.

Winning squad battles gets you points. Play on a higher difficulty for more points. The higher your rank at the end of the week-long window, the better your rewards are, ranging from premium player loans at the lowest level, to multiple mega packs and 100,000 coins at the highest level. Squad battles are challenging, as you’d imagine, but they’re also a fun and involving way of earning coins and packs. For matches against human opponents, you’ll want to play division rivals mode. 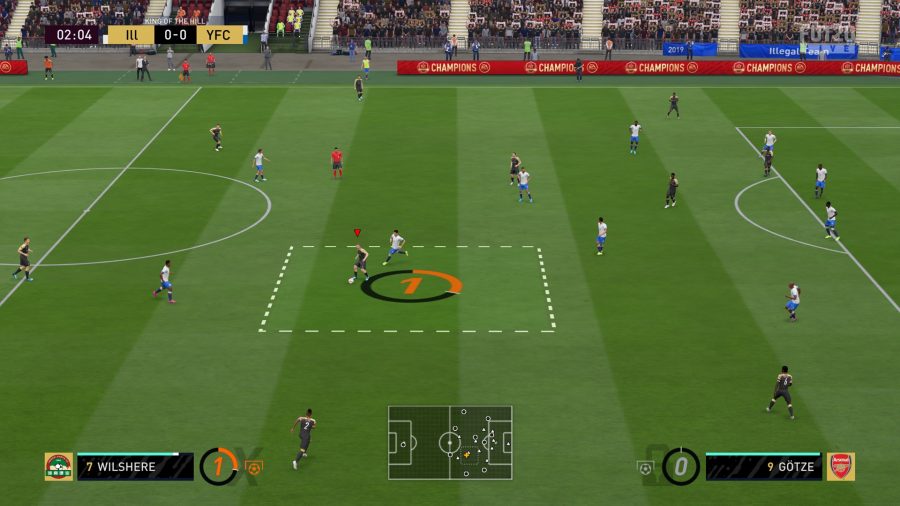 If you fancy playing with some slightly more unconventional rules, head to the friendlies tab. Four modes make their debut here: in max chemistry mode, your team has 100/100 chemistry; in swaps, three players are picked at random and traded with your opponent when the match begins; in king of the hill, dribbling inside a zone multiplies how much your goals are worth; and in mystery ball, modifiers emerge every time the ball exits play, whether that’s a boost to someone’s dribbling or tripling a goal’s value.

These modes join the existing four: headers and volleys, no rules, long-range, and survival. You can play against the AI, as well as human opponents online and off. Regardless of your competition, however, the one constant is that nothing is permanent in friendlies – not injuries, contracts, suspensions, or fitness. This makes it the perfect environment in which to have a laugh without doing lasting damage to your club. The shareholders thank you.

Draw some superstars in draft mode

With all the various ways to play FUT, don’t forget about draft mode. A fairly recent addition launched in FIFA 16, FUT draft sees you pick a player for each position out of five high-quality options. Do you want Eriksen, De Bruyne, or Reus in the centre of the park? Who are you having upfront out of Messi and Ronaldo? It’s an embarrassment of riches.

Once you’ve sorted your squad out, it’s onto the four-game ladder tournament. Four wins gets you plenty of gold and card packs, three earns a little less, and so on. Even if you don’t win a single game, however, you’ll still get something for your trouble. That’s because the fee to enter draft is a staggering 15,000 coins, or 300 points. So draft is definitely a mode to try if you’re feeling a little flush. And hey, you might get lucky and win a draft token, which gets you back in the mix for free. 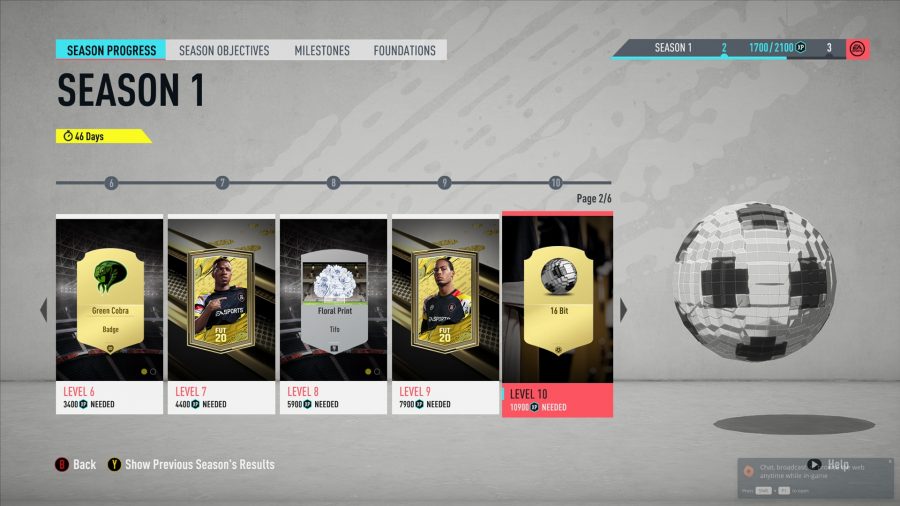 Objectives are a mainstay in FUT, but they’ve received something of a makeover in FIFA 20. Now, there are seasons objectives in addition to daily and weekly ones, which offer various tiers of prizes throughout a period of a month and a half. Earn XP by doing objectives, which refresh at different rates, and you’ll level up to make progress through your own personal season.

So, for example, you’ll log in and complete the Oktoberfest objectives, which task you with things like scoring a header using German player. This gets you XP. Navigate to the seasons objectives and you may find you’ve got a prize for levelling up, whether that’s a card pack, panther club badge, 8-bit stadium theme, or a ball coloured like the cosmos. Seasons objectives are long term goals with cool novelty winnings, so they’re well worth chasing.