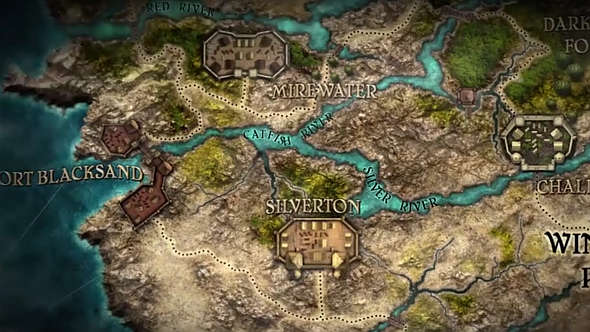 Fighting Fantasy Legends has just been announced via a brief teaser trailer. This should be exciting news for anyone who grew up in the 1980s – Fighting Fantasy is a classic RPG property that’s been sadly neglected in the world of videogames, even as its peers have found success.

The teaser trailer is enticingly brief, showing a flash of a map of Old Allansia before locking it away behind the new Fighting Fantasy Legends logo. The towns of Mirewater, Silverton, Chalice and Port Blacksand are all visible, dotted around the Catfish and Silver rivers.

Fighting Fantasy is a venerable name in role-playing, beginning life as a series of single-player game books with their first volume published in 1982. They were created by British writers Steve Jackson and Ian Livingstone, who would go on to found tabletop gaming giant Games Workshop.

Fighting Fantasy Legends will be developed by Nomad Games, a new indie studio staffed by veterans. Their first game, Talisman, is a digital version of an old Games Workshop fantasy board game.

There have beena number of videogamesbased on the Fighting Fantasy licence, but it’s fair to say none of them have been particularly noteworthy. That’s a shame, given that contemporaries such as Warhammer and Dungeons and Dragons have proven that age is no barrier to success in the digital world. More news is due next week after EGX Rezzed.