Viking legends have been kept alive in pop culture through adaptation – whether in the sci-fi tinged interpretations of the Marvel movies, or the entire subgenre of heavy music literally known as Viking metal. Wikipedia will back me up on that one.

Lately, though, there’s been a move toward tackling the old stories as simply as possible – encapsulated by Neil Gaiman’s best-selling Norse Mythology, which retells the legends of Loki, Thor, Odin et al back to back, like a stark and bloody sitcom. Fimbul fits that trend, sending you from the frigid shores of Sweden, to the borders of Midgard, and beyond into giant territory.

The Jotunheim of Fimbul feels very much like the one where Thor was once tricked into quaffing from a horn connected to the sea in an emasculating drinking contest. It’s like visiting the familiar set of Friends, only Ross is a troll and Central Perk is a bare drinking hall buried by snowdrifts. The same, then.

It’s disarmingly fresh for a game to not be removed from this lineage of stories by indulging in a cross-mythological cast of characters. The story’s strong enough, too, told through gaunt comic strips that concern men with wind-hewn faces and nothing nice to say to each other. If Fimbul takes anything from non-Viking legend, it’s the ancient Greek preoccupation with revenge, and the cycle of killing that inevitably leads to an understanding that only mercy can end bloodshed.

The game beneath is similarly simple, almost entirely given over to hack-and-slash combat. There’s a light attack, a heavy attack, and a block button. Holding the latter down will place you in orbit of the nearest enemy, allowing your forward rolls to become timed dodges. Enemies are typically easier to take down when stabbed in the back – revenge story, remember – so evading and picking your moment to lodge an axe between the shoulder blades of an opponent is best practice.

A combo bar builds as you poke holes in your enemies, letting you carry out knockdown attacks, executions, and crucially, set down a banner that heals you over the course of a few seconds. That banner is a tangible object in the world susceptible to the blade, so picking your moment to recuperate is perhaps the most vital skill to develop over the course of Fimbul’s short runtime. Your combo bar shrinks as you take damage, sending you scrambling and lending battles an unusual rhythm.

These skirmishes, though unshowy, have a consistently desperate character – helped by the transient nature of your equipment. Thrown spears will break and shields will splinter, so that you’re always casting your eyes about the battlefield for a nearby replacement you can reach without exposing yourself to blows. It’s a shame, then, that sword and axe are your only options of primary weapon, and neither are particularly distinct. 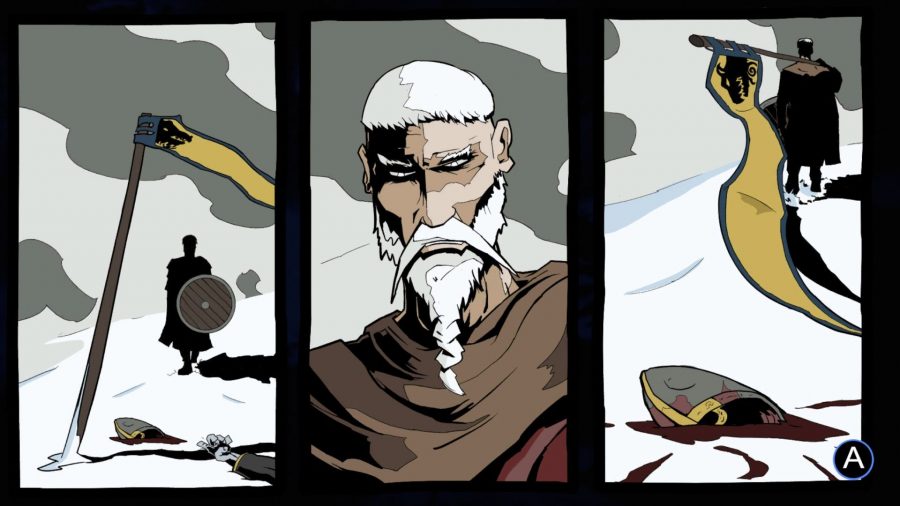 Worse, though, is the campaign’s increasing tendency towards staged fights with trolls and giants as this brief game builds to its climax. These mostly gruelling exchanges centre around the tired boss battle business of recognising patterns of behaviour and hitting weak spots, throwing out the barebones mechanical promise shown in those early scrums. The game doesn’t seem entirely equipped to host these titanic clashes, either. Once I’d learned the routine of Fimbul’s final enemies, the threat of a crash to desktop loomed larger than the giants themselves.

Those technical shortcomings are unfortunately matched in the visuals, too. Where Fimbul’s best aspects are stripped back and bleak, its effects work is often clumsy and overplayed, as if its artists had accidentally spilled a whole tub of depth-of-field onto the canvas and had to make the best of it. In places the environments are so smothered by lens flare and frost effects, it’s like visiting Sweden in smudged glasses. The mess that only highlights the restraint of a game like Frostpunk, which shoots far more successfully for a similar sort of screen glaze.

Thankfully, like Gaiman’s Viking sitcom episodes, Fimbul’s tale wraps up long before the campfire burns down to the embers – rendering it more disappointing than hateful. All the anger instead comes from the petty, single-minded creatures at the dark heart of its story, who deserve better.

This hack-and-slash wears its simplicity like a lovely Scandinavian jumper, but is scarcely substantial enough for its handful of hours and drenched by awful aesthetic choices.