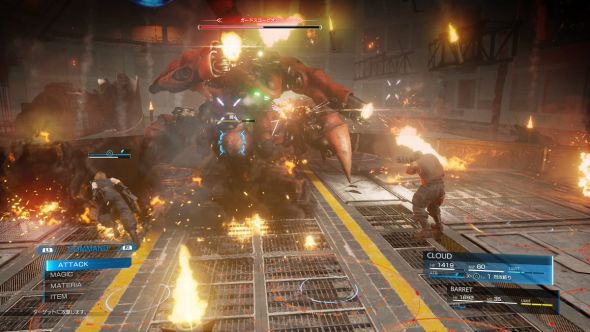 You can destroy terrain and pieces of bosses in the Final Fantasy VII Remake. You’ll also be able to take cover so as to hide from enemies, and it sounds like Materia may be both an equippable item (as in the original) and a skill, with some bearing on the effectiveness of the Materia you have equipped.

For more levels up and Phoenixes Down, check out the best RPGs on PC.

The tidbits have emerged from an interview given by the game’s director, Tetsuya Nomura, to Famitsu at Magic 2017 last month. If you’ve been following the game, you’ll remember thatnew screens, including some of the Guard Scorpion fight, were released at that event.

One of those screens shows Cloud appearing to take cover behind a crate as a Shinra soldier fires on him. Nomura confirmed there will be a cover system, saying “since this title is seamless and you see the path that you’re infiltrating, I decided [a cover system] was necessary for the sake of realism. You can use it in ways such as to hide in cover until enemy soldiers move along, or to throw a hand grenade from cover to annihilate the enemy. Of course, those who find it bothersome can just throw themselves into the fight.”

Nomura also teased “a special element” when gun-wielders like Barrett make use of the cover system.

On the Guard Scorpion fight, Nomura says the terrain will affect the flow of combat. “For example, when there’s an enemy in a position that can’t be reached by Cloud’s sword, it’s more effective to switch to Barrett. It’s becoming strategic in that way.”

The Guard Scorpion looks like an even more formidable foe in the second #FFVII Remake screenshot shown for the first time at @MagicMonaco pic.twitter.com/GWaSIm5Cng

Some objects and terrain elements will also be destructible, “and there are part-based destruction elements like breaking the Guard Scorpion’s legs.”

The interview wraps up with a reference to the UI, which is incomplete, but the interviewer notes that the ATB gauge “seems to stock three bars” and that the command list includes “Materia” and a technique name and level.

Nomura says he’s not ready to discuss ATB or techniques, but “regarding Materia, what I can say is that it’s something like a skill. Different from magic, you can use it when you’ve set a Materia that has an effect that can be used in battle.”