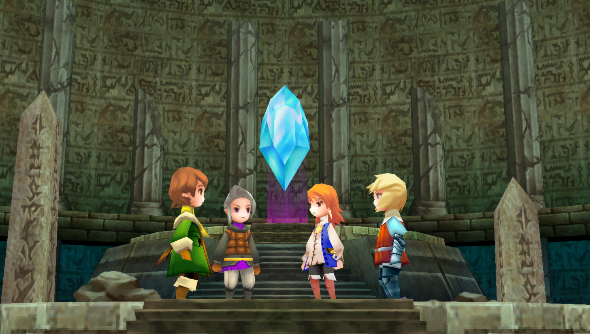 The beloved Final Fantasy series has 14 main entries and numerous spin offs, most of which have never been seen on the PC. Some haven’t even been seen this side of the globe, with the classic Final Fantasy 3 having been a Japanese exclusive title until 2007, when it was remade for the Nintendo DS. Now that remake is being remade for the PC, and will be hitting Steam sometime soon.

A Steam store catalogue entry has turned up, and whilst not containing anything to suggest when Final Fantasy 3 will be available on PC, it does contain screenshots and a short bit of spiel. There will be improved graphics and story sequences, quicker menu browsing, and support for Steam Trading Cards. Job Mastery Cards are also getting a makeover with new art work.

The game is clearly a port from the DS version, with blocky characters that don’t look a million miles away from the PSOne era Final Fantasy games. But everything does look much sharper and cleaner than it’s older, portable sibling, with some HD textures going on.

Steam offers no pricing as of yet, but with a catalogue entry now live, we don’t expect it to be too long until costs and release dates are published.