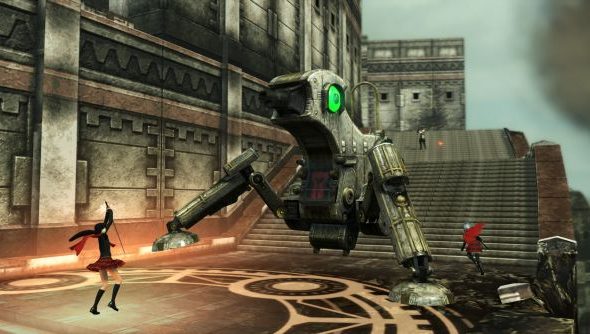 It’s Square Enix PC port launch day and you know what that means: problems. Final Fantasy Type-0 HD, a PC port of a console port of a quite good (I’m told) handheld JRPG was released today. It follows a class of magical-power-wielding, anime-hair-owning, impossible-sword-slashing students as they try to navigate their war-torn country. It’s more action focused than you might expect if “Final Fantasy” still conjures images of Squall and Cloud for you, with a battle system that leans towards third person action rather than turn based ability usage.

While better than what happened on the first days of previous FF ports, Type-0 has not come without issues. Some have moaned about the graphics, but given it’s a five year old PSP game at heart, they might need to take a dose of reality. More of a problem are very poor keyboard controls – grab those 360 pads folks, they aren’t done yet – and only a couple of supported resolutions.

There’s an 30 FPS lock in place too, though again that’s understandable in a cutscene-heavy game that was originally on low power devices but it’s a shame in a game with so much movement. Some people are also reporting problems with fullscreen, though any complaints you’ve seen about the launcher are likely now outdated as it was patched quickly from its crashy state. A kind soul on Reddit has gone through all the available graphics and menu options for your perusal.

Beyond all that, there’s a lot of love for the game itself from those that played it originally or picked up the more recent console versions. You can grab it on Steamfor £19.99/$29.99, where there’s plenty of additional user reviews outlining problems if you’re curious. You’re too late to pick up the incredible looking Dota 2 itemsthat came with a pre-order, unfortunately.