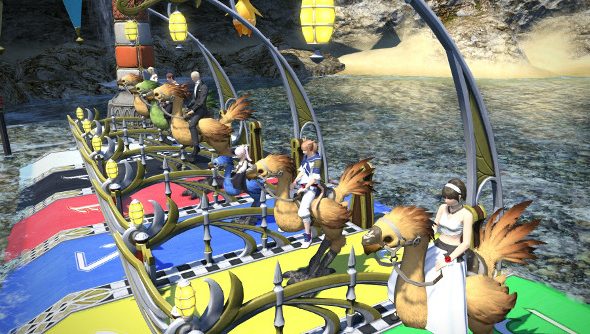 Patch 2.51 brings the Manderville Gold Saucer into the world of A Realm Reborn. The Gold Saucer is a callback to the location from Final Fantasy VII and probably one of the most famous locations in the series. It’s kind of the Rick’s Cafe of Final Fantasy, where you’ll be able to gamble and take part in minigames, plus raise your stable of chocobos like the king you were born to be.

Saddle up atop a majestic bird and go roaring down the turf to be crowned the fleetest in all of Eorzea! Chocobo racing, or “the sport of sultans”, as some have taken to calling it, is an experience like none other.

Even the best bird has its limits, so what’s a trainer to do when their chocobo reaches theirs? Arrange a “covering”, a union between two retired veterans to produce fledglings of a higher pedigree.