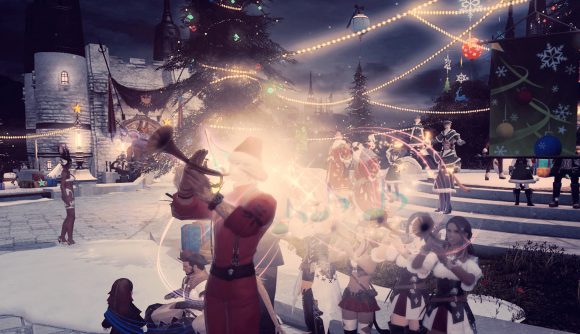 Square Enix kicked off the annual Final Fantasy 14 holiday event Starlight in the MMORPG game this week, and the community took celebrations to another level. Players organised an in-game Santa’s grotto, complete with house band, elves, and a giveaway, to mark the occasion.

This year’s Grand Starlight Giveaway was put together by four Free Companies, Primo, Xia, Al’ar, and Nomad, on the Jenova server. During the festivities in Limsa Lominsa, players on the server could enjoy the musical offerings of Moogle Troupe, a group that perform in moogle costumes, as they wander, or they could wait in line to visit Santa Clause. A great many elected for the latter, creating a queue that became hours long.

Streamer and content creator John Paul ‘itmeJP’ McDaniel took a brief video of the line, below, all the players of the open-world game decked out in Christmas garb, waiting for whatever present they might receive. “Thank you so much, Aether, for coming out in droves to celebrate Starlight with PRIMO, XIA, AL’AR, and NOMAD on Jenova!” Annamarie, one of the organisers of the event, tweeted after. “All the work that goes into our Grand Starlight Giveaway is inspired by you. Thanks for making our fifth anniversary the best one yet! See you next year!”

what a video game and what a community #FFXIV @FF_XIV_EN pic.twitter.com/BMoDUkjH8P

Festive events are still happening – the Moogle Troupe will be performing on December 21 on Faerie at the Goblin Subdivision. You can find details on all the official Starlight goodies here, it runs through to December 31. Final Fantasy 14 patch 5.4 launched earlier this month, introducing new main scenario quests, a new raid dungeon, and more.