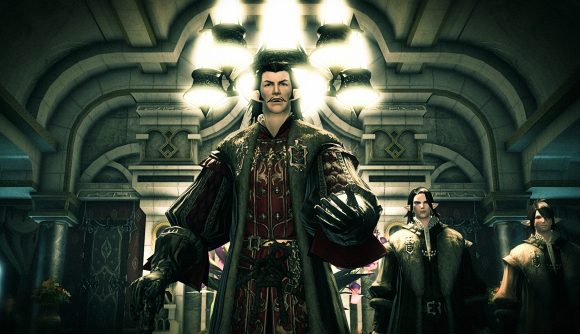 Final Fantasy XIV players are gathering in-game to pay their respects to voice actor Stephen Critchlow, who lent his vocal talents to Count Edmont de Fortemps, and has passed away at the age of 54. The news of Critchlow’s passing was revealed by audio drama production company Big Finish, who Critchlow had worked with over the years.

At the time of writing, FFXIV fans have held vigils on the Brynhildr, Leviathan, Jenova, Mateus, Balmung, Midgardsormr, and Adamantoise servers (below), with more likely to follow. Everyone has chosen to gather outside of Count Edmont de Fortemps’s manor in Ishgard, where you first meet him. You’re introduced to the character of Edmont at the start of the MMORPG’s Heavensward expansion, which is one of the game’s first significant slices of post-game content. At that point in the story, you’re on the run from a base you’ve set up after falling foul to a plot of betrayal. Edmont agrees to take you in, even if it may raise some eyebrows among other citizens of Ishgard.

Critchlow also serves as the narrator of the chapter. Outside of Final Fantasy XIV, though, you’ll find that the actor also voiced Xenoblade Chronicles 2’s Bana and was regularly involved in audio dramas for Doctor Who.

Here are some of the shots players have taken from the vigils:

In memory of Stephen Critchlow, the voice of Count Edmont de Fortemps, the FFXIV community on Mateus (and other data centers/worlds) has made a vigil in his honor. We will miss you and you will always be in our hearts, Stephen Critchlow. #FFXIV #FF14 pic.twitter.com/CKl0nuYgij

Vigil happening on Balmung if anyone wants to come pay respects.

I was able to make it to the vigil in Midgardsormr.

Rest in peace, Stephen Critchlow, and thank you for bringing life to such a beloved character. You will be missed. pic.twitter.com/AQ4UJ2p6Uf

The crowd on Adamantoise keeping Vigil for Stephen Critchlow, the VA of Edmont de Fortemps. RIP

Thanks for being a father figure for many of us #FFXIV pic.twitter.com/pV55goVMHX

If you’d like to read more tributes to Critchlow, Big Finish has collected a series of memories from people who knew him. You can also still donate to a fundraiser he set up to raise money for NHS Charities Together.