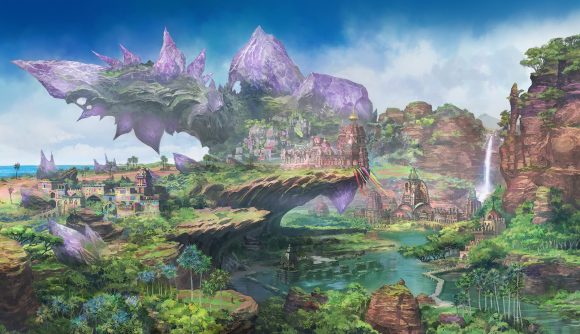 The next Final Fantasy 14 expansion has been named, and it’s an exciting one. Endwalker will arrive autumn 2021, and it’ll bring to a close the story started in A Realm Reborn, the MMORPG game‘s reboot from 2013.

Endwalker was revealed during a recent showcase, where game director Naoki Yoshida made a series of announcements on what players can expect when they get into the new chapter. Broadly, the plot concerns a trip to the moon, to uncover more details on the final days of the Ancients, and will finish “the tale of gods light and dark”. The level cap will move to 90, and the main story will conclude in patch 6.0. New areas, raids, jobs, and all the other usual good stuff will be included.

Radz-at-Han, on the island of Thanvair, and the Imperial capital of Garlemaid are two incoming locations – the former’s a towering metropolis, the latter’s in a sorry state according to a teaser image. Another residential district has been plotted, in Ishgard’s Firmament, though you won’t be able to buy any of it until patch 6.1, and Matanga of Arkasodara is one of several new tribes that’ll be scattered through-out the adventure. Pandamonium is the latest high-end raid, giving you and seven cohorts another Eden and Omega-sized dungeon to battle through, and a 24-person Alliance Raid is on the way, too.

Two major additions are the jobs, though only one’s been detailed. Sage is a “barrier-type” healer, using aetherically-charged items to top up people’s stats. Healing will be split in two come Endwalker, between barrier and pure, and to use barrier you’ll need at least one character at level 70 and the expansion loaded. The other job will be a melee DPS.

Here’s a teaser for Sage:

You can watch the entire mammoth two-and-half-hour show here:

Belts are being removed due to being, well, not all that useful, and their inventory space is being split among your other weapon and accessory slots. Data Center Travel is coming, allowing you to visit pals in other data centers, but the finer details, and when it’ll arrive, remain to be seen.

A farming game, of sorts, called Island Sanctuary is being introduced in Endwalker, letting you care for some woodland friends to unwind from all the world-threatening malarkey. Endwalker will contain all its plot-points in the base expansion, and wrap up the Final Fantasy 14 story that’s run the last 10 years. Update 6.1 will start the “Zodiark-Hydaelyn saga”, according to Yoshida.

Square Enix is hosting a completely free online Final Fantasy 14 Fan Fest, taking place May 15 and 16, where we’ll get some more details on Endwalker, and possibly a release date. Until then, we have Final Fantasy 14 patch 5.5 to look forward to, the first part of which launches in April.