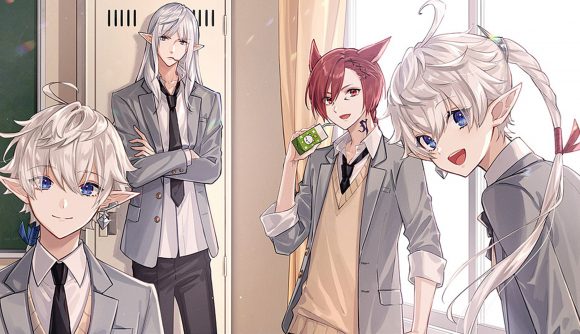 The Final Fantasy XIV manga was revealed in the most recent live Letter to the Producer stream, which will be called either Academia Eorzea or the simpler Eorzea Academy in English and Shiritsu Eorzea Gakuen in Japan. Now we got our first look at the comic, including a surprise name for the Academy’s Principal.

The spin-off manga series for Final Fantasy XIV has currently only been revealed for a Japanese release as part of Square Enix’s Manga Up! platform and will seemingly be a prequel to the events of the MMO. In Japan at least the first issue will debut on the service on December 24 and will be updated weekly every Friday from that point on.

While we still don’t know about the release in other countries, at the least today fans got a look at the first teaser art by Amaichi Esora and a brief synopsis of what the series will be about. The art shows popular characters Alisaie, Alphinaud, G’raha Tia, and Estinien as students in a classroom, with Y’shtola standing by in the background as their teacher.

The synopsis – originally published by Famitsu and translated by Twitter user @aitaikimochi – states that the Academies of Light and Dark have been merged into the high school Eorzea Academy, where their previous rivalries cause a lot of issues. Most interestingly, Scion receptionist Tataru Taru seems to be the new Principal of this academy – something a few fans may raise their eyebrows at.

One of the most interesting things about the manga is that it was seemingly announced back in 2019 but dismissed as an April Fool’s joke, as 4Gamer notes. Well, it’s definitely real, and it’ll release in Japan by Christmas – and will hopefully get a worldwide release shortly after.

As for Final Fantasy XIV itself, the big new Endwalker expansion will also drop in December – and you can check out the new patch roadmap right here.