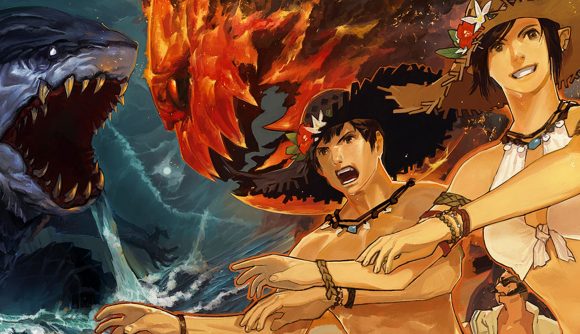 There’s a “Summer Shark Blowout!” on the way to Final Fantasy XIV in just a couple of weeks. That’s right, the MMORPG game’s summer festival – the Moonfire Faire – returns this year, with goodies aplenty to scoop up and tasks to complete.

Final Fantasy XIV’s 2020 iteration of the annual summer festival has been announced for August 12 on The Lodestone. While details of the event aren’t exactly laid out in detail, it looks like we can expect to see the quest giver from last year’s event make an appearance again this year. Introducing a quest titled ‘A Fish Too Far’, publisher Square Enix says, “Mayaru Moyaru is grinning from ear to ear, and yet something in his eyes suggests this year’s celebration is not all smiles and sunshine. Whatever dangers lurk beneath the surface of this year’s faire, event chaperones are not like to turn away a helping hand.”

Based on the picture accompanying the post, it looks like the idea is to confront some very grumpy sharks, all while clad in one of the summer-ready swimsuit clothing sets the event brings, of course. Speaking of which, the faire’s event items include things like a “Summer’s Flame” straw hat, top and wrist gear (which are mainly beaded arm bracelets), pareo wraparound skirt, and sandals. These are available for both female and male characters.

The #FFXIV Moonfire Faire is returning to Eorzea! 🎆 Anyone fancy a little Flame Dance? https://t.co/ZDHlkRYid9 pic.twitter.com/gKH8eikdFE

Plus, there’s a new “Flame Dance” emote and outdoor furnishing item – a water bomb stand, which looks like a hot air balloon packed with the colourful throwables – to grab, too.

When is the Final Fantasy XIV 2020 Moonfire Faire?