When director Naoki Yoshida and his team at Square Enix brought Final Fantasy XIV from the brink of death, it was a remarkable achievement. They’d done the seemingly impossible, and over four million players have enjoyed the fruits of that success. But two years later, Yoshida would have to show fans of Final Fantasy XIV that they could not only continue to build upon their redeeming MMO, but exceed it.

Heavensward takes the strengths of A Realm Reborn, and just builds upon them. The writing, already gripping and addictive, is taken to new heights. The expansions zones are bigger and better than ever, and players can take advantage of their verticality with the introduction of flying mounts.

Along with the reptilian Au Ra race, three interesting jobs – Dark Knight, Machinist, Astrologian, and free company crafting, Final Fantasy XIV has proven once again why it’s one of the best MMOs out there, and there’s very little reason why you should not be playing it, today.

The wait for Heavensward had me in all sorts of excitement, just like when you’re waiting for the next season of your favourite TV show. See, Final Fantasy XIV has a truly amazing story. A lot of MMOs these days use their narrative to loosely bind a dozen or so systems together – they feel empty, hollow, almost like an afterthought. 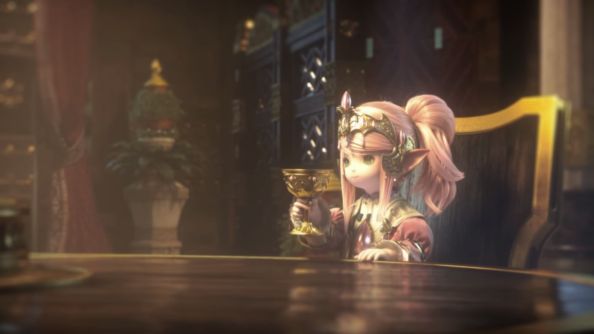 FFXIV’s storyline is its backbone. There’s love and betrayal, comedy and sadness, epic boss battles and touching moments that stay with you long after they’ve passed. The writing is top-notch, and its consistent quality drove me through the entirety of Heavensward with an insatiable hunger just to know what happens next.

It’s interesting to note that some of the english voice actors, even for certain main characters, have been switched up. A Realm Reborn players may have to get used to two-year old characters suddenly sounding unfamiliar at best. It’s a pretty ballsy move by Square in an effort to spruce up a previously forgettable effort, but unfortunately wasn’t enough for me to switch from the original Japanese audio. 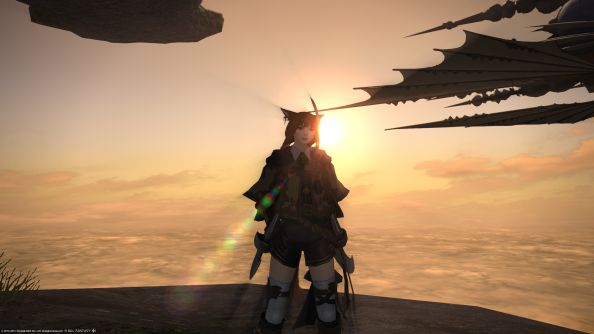 The world of Eorzea has opened up more of her exotic locales for players to explore. Previously closed to all foreigners, the city-state of Ishgard finally has accepted the need for outside help in their embroiled war with the Dravanian horde – a host of dragon-kin hell-bent on the city’s destruction.

Aiding Ishgard takes you through some of the most varied environments FFXIV has to offer. Beginning with Ishgard and Coerthas Western Highlands, you’re introduced to a cold and unforgiving winter desert. Soon, you’ll move onto the tropical floating islands of the Sea of Clouds, where the sun proudly stands tall in the sky. Still further afield is the home of the dragons themselves, Darvania, which is home to battle-scarred mountains and teeming Chocobo forests.

The zones themselves are huge – we’re talking almost double the size on average of the ones in A Realm Reborn. Moving into a new map always had me taking a few moments to recompose myself, as I looked into the vast abyss of unexplored content. Helping you to explore all of this extra real-estate is the introduction of flying mounts. You’re given the power of flight early on in Heavensward, but before you take to the skies with your cute Chocobo, you have to earn it.

Each zone is comprised of Aether Currents, requiring both on-foot exploration and quest completions to collect. Only once you’ve collected all of the currents in a zone, are you able to fly in it. This is where FFXIV gets it right with this compromise, something other MMO developers struggle with as they’re determined players don’t simply disregard their hard-laboured landscapes.

As long as you do a little bit of exploring, you’ll end up finishing all of the currents in any one zone just as the main storyline is taking you to somewhere new – but you’ll still have a few dozen side-quests still to complete. Players only concerned with the main story can just move on, but completionists – like me – now have an even easier time finishing up every last morsel a zone has to offer.

With a healthy dollop of DirectX 11 smothered onto the game, journeying through Heavensward’s zones is a real treat for the eyes. Rarely has a game had me tap the screenshot key so much as I discovered one beautiful vista after another. 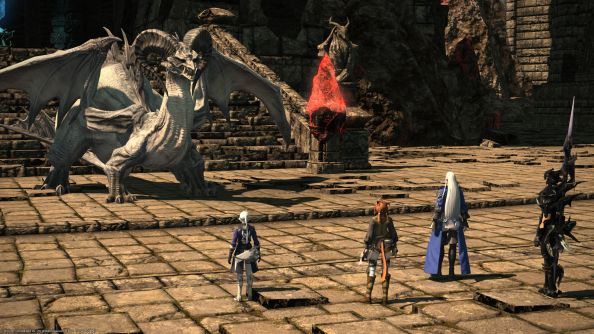 Heavensward comes bundled with three brand new jobs – the two-handed sword wielding Dark Knight, firearm and tech-savvy Machinist, and the superstitious tarot card reading Astrologian. They provide a tanking, DPS and healing role respectively, each bringing with them fresh playstyles. Even though you require Heavensward to play them, they begin at level 30, meaning you’ll need to replay some A Realm Reborn content to catch up. I was a little sad to see this, and would’ve rather been able to play them right out of the gates at level 50, seeing as you have to be that level to enter Ishgard in the first place to pick up their quests.

But the jobs themselves are welcome additions to the existing roster, who also got new skills and abilities to play with. Dark Knights, with their dark magic and gigantic swords, employ a little more risk-vs-reward than the other tank classes. Machinists, even though they’re natural ranged specialists, have a great deal freedom with their skills and mechanical drones. For me though, Astrologians take the prize when it comes to sheer enjoyability. Their card-drawing mechanic is overpowered and fun, balanced only by their ‘jack of all trades, master of none’ stances when it comes to healing throughput.

Players will also be able to chose a brand new race: the Au Ra. Sporting skin dotted with scales – including a tail – and pronounced horns, they fit in well with the predominant dragon theme of the expansion; though I’ve been told again and again by die-hard fans that the two are not related. 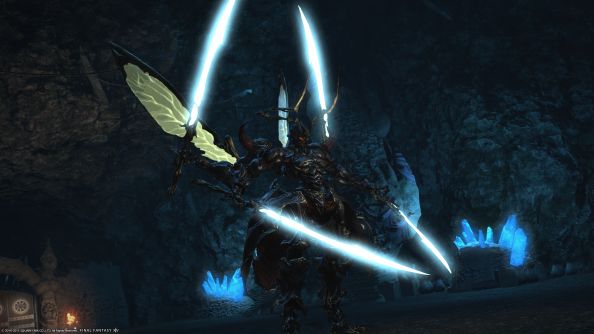 Dungeons and raids are a popular pastime in MMOs, and FFXIV has already made good on its ability to create engaging instances with A Realm Reborn. But Heavensward takes it a step further, and mostly in the right direction.

Each of the dungeons are gold mines of history and context for those who look hard enough – lore junkies will be pleased. The Dark Vigil is a ice-encased tomb, harbouring a tragic story, and even deadlier inhabitants. In contrast with The Great Gubal Library, whose infinite walls of books are haunted with an eerie melody, and has a few nostalgic nods to Final Fantasy games of old.

A criticism I had with A Realm Reborn was that trash mobs aren’t rewarding enough, and unfortunately that’s still true. Yet with Heavensward, boss fights are broken up by more interesting mini-boss encounters to at least make the trash feel less like an annoyance. The boss fights themselves are a bit more forgiving this time around, at least in early instances, but still manage to steer away from simple tank ‘n’ spank snooze fests.

The Primals in Heavensward – straight up encounters with powerful demigods – continue to feature some of the best fights in any MMO I’ve been a part of. Seeing Ravana for the first time – pictured above – sent chills down my spine, and going toe-to-toe with him, along with seven other players found swiftly by the Duty Finder, was simply epic.

Speaking of epic, credit again goes to Nobuo Uematsu, legendary composer on many Final Fantasy titles, for producing an incredible array of battle-themes and music. His pieces of musical ingenuity compound the stage to make whatever you’re experiencing even more memorable. If I could pick up a soundtrack for Heavensward, I’d do it in a heartbeat. 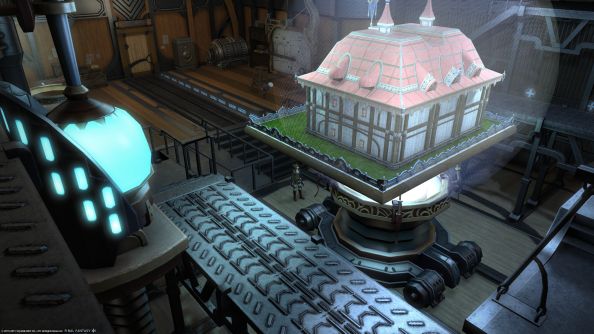 Stepping away from the tarries of war, Heavensward also adds a long list of new features to more peaceful vocations. Crafting classes have all been expanded as well to level 60, adding new recipes for those who partake. Gathering professions too can make the journey to the new max level, gaining the ability to harvest new and rare materials. If that isn’t enough, then you need to take a look at one of the most exciting features of the expansion: the Free Company Workshop.

Every Free Company that owns a guild house can now access a high-tech workshop, which can be used to undertake grand projects for some of the biggest creations available. The Free Company as a whole will need work together to succeed in these efforts, requiring masses of materials from multiple gathering and crafting professions. So what can you build, you ask? The most significant of the lot is your very own Free Company airship, which can be sent out on its own little exploration adventures in return for loot and materials. Hammering together such a vessel is done in pieces: the hull, rigging, forecastle and aftcastle. Multiple different variants of each piece, each providing a different ratio of stats to give you bonuses to your voyage missions, can allow you to get all Frankenstien with your flying boat.

Even once you’ve constructed your mammoth ship, there’s still plenty to do in the Free Company Workshop: a plethora of housing items and furniture can be crafted to furnish your own halls, both aesthetic and practical; eventually players will be able to make a table that allows guild members to play Final Fantasy’s own Triple Triad card game. 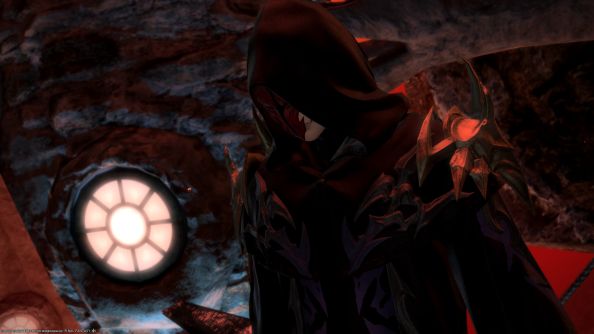 Final Fantasy XIV: Heavensward is an impressive first expansion to Square Enix’s flagship MMO. There’s no single new addition of feature that worsens its experience; it’s simply more of the great content we’ve come to know, some of which has evolved into something better. As I look towards what’s on the horizon, I can immediately see a brand new raid, Alexander, which is begging me to test my mettle.

For existing fans of FFXIV, getting involved with Heavensward is a no-brainer. New players should take this expansion as a sign of promise. You might’ve heard that you’re required to complete the entirety of A Realm Reborn’s story content, plus its subsequent patches, before you can even dip your toes in Heavensward.

Do not be put off by this – it’s only because the narrative is so integral to the game, you’d be absolutely mad to skip it.

Putting aside the superb plot, Square have made it easier than ever to catch up: main scenario quests have had their experience rewards doubled, and also provide high level equipment. You’ll also be put in priority queues for dungeons and story instances to get you through them hassle free.

Yoshida and his team has cemented FFXIV’s place amongst the MMO titans that dominate today. They’re not going anywhere – if any new MMO is going to see a decade plus lifespan, it’s this one. Don’t wait another second – Final Fantasy XIV, along with Heavensward, is an MMO you need to be a part of.