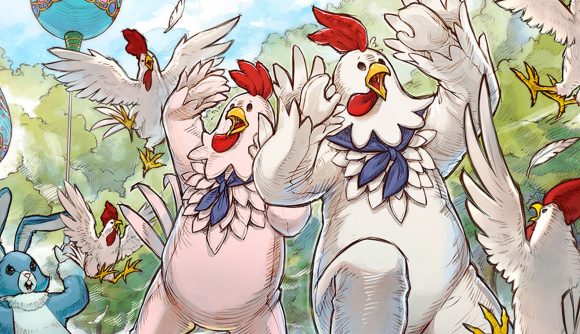 Good news, Final Fantasy 14 fans – the MMO’s annual Easter-themed event Hatching-tide is on the way, and soon. This year’s iteration kicks off next week, and – as you’d expect – means some new in-game goodies to scoop up based on each year’s particular flavour. This year’s event? “A cracking good time!”

Head to the Final Fantasy 14 Lodestone site and you’ll be left in no doubt what the theme of this year’s particular Hatching-tide event is all about: “joyous mayhem” and “eggciting revelry”. That means ‘giant chickens with cravats’, it seems. The seasonal event kicks off next Wednesday, April 14, at 9am BST / 4am EDT / 1am PDT according to the site, and runs for two weeks until April 28 at 3:59pm BST / 10:59am EDT / 7:59am PDT.

To get stuck into the event, you’ll need to go find Jihli Aliapoh in Old Gridania, who’ll “greet you with anxious enthusiasm”, and you’ll need to be at least level 15 to be eligible to join in the revelry, too.

Event items up for grabs this time round include some chicken-themed armour. Well, it’s more a giant chicken costume with a lovely blue knotted scarf draped fetchingly around its white feathery shoulders, but you get the idea. It comes in two parts – the head and body pieces – so, feasibly, you could run around in your regular get-up with just the head or body or a huge comedy chicken if you scoop the goodies up. Which sounds pretty darn neat.

Looks like Jihli Aliapoh is up to her old chicks! 🐣

Get ready to cluck into action, the Hatching-tide will be arriving in #FFXIV with colorful decorations and joyous mayhem on April 14! 🐔 https://t.co/0BXpawfRii pic.twitter.com/Wejk6ilb5W

There’ll also be the ‘Hatching-tide Confections’ and ‘Archon Egg Pouch’ tabletop items up for grabs during the event, too. Lovely stuff. As ever, Final Fantasy 14’s seasonal quests can only be completed while the event is live, so if you’re keen to get stuck in, get ready to, well, get stuck in on the dates above.

In the meantime, check out our rundown of the best MMOs and MMORPGs on PC if you’re on the lookout for another behemoth roleplayer to try out.