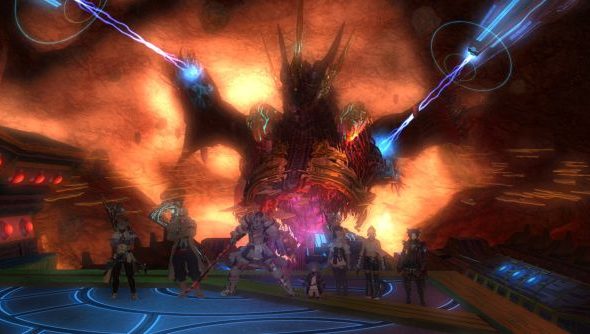 In the latest Letter from the Producer for Square Enix’s Final Fantasy XIV: A Realm Reborn, director and producer Naoki Yoshida revealed that only 50 teams across all servers had bested the games hardest raid. The Final Coil of Bahamut was released with patch 2.4 a month ago.

“For those of you still making your way through, or preparing to step foot into the Final Coil─only about 50 teams have cleared the entirety of the Final Coil across all servers,” said Yoshida. “So there’s no need to rush.”

Raiding in MMOs represents the ultimate challenge. Final Fantasy XIV: A Realm Reborn is no different, offering spectacular Primal battles and the Coil of Bahamut raid for groups of eight players to take on.

The final wing of the latter was released only a month ago, and with it the race to see who’d complete the raid first, was on.

“Patch 2.4 also brought the final turns of the Coil of Bahamut, and the conclusion to its incredible story.” Yoshida said. “Eorzea’s bravest hit the ground running, and in less than a week, on November 2, 2014 at 9:03 p.m. JST, the coil was cleared. The group to accomplish this amazing feat was Lucrezia, making them the first Japanese group to claim the title of world first. Congratulations on a job well done!

“A number of free companies (guilds) were competing to be the first to clear all four turns, and the dev team would check their logs daily, waiting to see who would be the first to finish. Following close on Lucrezia’s heels was Collision, who were actually first to clear the third floor. They put forth an incredible effort, clearing the final floor mere hours after Lucrezia. The third free company to overcome the final coil was Death and Taxes, a group well known across several MMORPGs.”

With only 50 teams globally attaining completion, do you think this makes The Coil of Bahamut, or at least the final wing, one of the hardest raids in MMO history? Share your hardest raid encounters in the comments below.