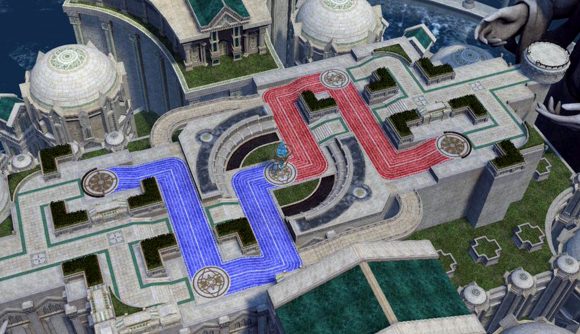 The new Final Fantasy XIV: Endwalker expansion is nearly here and it boasts many impressive new features, all of which were detailed in the latest Letter to the Producer stream earlier today – including a proper introduction to the new FFXIV PvP mode called Crystal Conflict, which sounds like it’ll be a more casual-orientated version of Overwatch’s Escort mode.

Square Enix previously announced that the next Final Fantasy XIV Live Letter stream hosted by producer Naoki Yoshida would provide details on the game’s new “casual-orientated” PvP mode, and they delivered on that promise with the reveal of Crystal Conflict – which will be added to the MMO in patch 6.1.

In Crystal Conflict, two teams of five players have to push a giant crystal in the centre of the map to their scoring area in the other team’s base. This is similar to Overwatch’s payload in Escort mode except that it’s far smaller-scale with more basic maps, although there will be traps or gimmicks on the map – the stream illustrated this with a big Bomberman-style explosion.

Roles and levels have no impact and the team specifies that Crystal Conflict is designed to “be played casually”. However, it will still feature Casual, Ranked, and Custom matches, skill-based matchmaking, and a series of short Seasons that take place between major patches. Players gain rewards by increasing their series EXP, and these rewards will include gear, mounts, and other items – and tokens earned will carry on to future seasons, so if you don’t like the look of the rewards you can save the tokens for the next set.

Check out the new PvP updates coming to #Endwalker in Patch 6.1! ⚔

Crystal Conflict will be added alongside the new Endwalker expansion, which the stream also revealed is being delayed until December. Still, there’s also going to be a new spearfishing minigame, at least.