The latest major update for Final Fantasy XIV is upon us. Patch 5.3, Reflections in Crystal, has plenty of new content for denizens of Hydaelyn – new story quests which wrap up the main narrative of Shadowbringers, new dwarf tribe quests and dailies, and a revamp of old content.

Most exciting, however – at least for those of us invested in the ongoing collaboration between Nier series lead creative Yoko Taro and the FFXIV development team – is the next installment in the YoRHa: Dark Apocalypse crossover event. As well as a new batch of story quests advancing the plot of the crossover, patch 5.3 brings a brand new Nier-themed raid, The Puppets’ Bunker.

If you haven’t been following the android antics over the past couple of game updates, worry not; here’s a rundown of the story so far. Having resolved the main events of Shadowbringers, our hero (insert your character’s name here, the more ridiculous and out of place, the better) is drawn into the petty goings on of an archaeological dig site in Kholusia.

Spurred into ever more reckless explorations of the site by mischievous dwarf twins, Anogg and Konogg, the band discover a strangely dressed young woman who calls herself 2P (for those of you playing at home, she looks awfully similar to Nier Automata protagonist, 2B). 2P encourages further exploration of the sealed machine factory hidden in the depths, leading to the first raid, The Copied Factory. 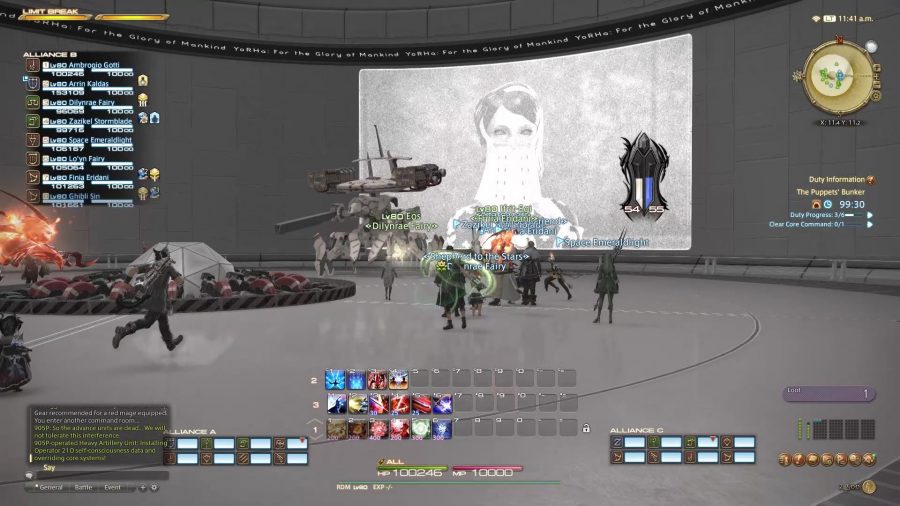 At the end of the factory, the raid group defeats an android who looks awfully like 9S, another central Nier character. He doesn’t seem keen on 2P, and gets hurled into an abyss for his trouble. The precocious dwarf twins meddle with technology best left alone with the help of 2P, who is suspiciously eager to aid in the repair of a high-tech ‘key’ of some sort. From this point on we’ll start delving into the events of patch 5.3, so be warned that spoilers abound.

The Puppets’ Bunker is exactly the kind of well-polished, slick, and enjoyable content that FFXIV has become known for

In a shocking twist (sort of), 2P betrays the party, taking the key for her own ends, orchestrating an attack on the dig site, and attempting to kill Anogg. Thankfully, the plucky dwarf is rescued by a familiar face – it’s 2B! Knew she’d turn up eventually. 2P retreats with her white-suited allies to an underground bunker, unlocking the new raid.

The titular Puppets’ Bunker will be familiar to players of Nier Automata – it appears to be the crashed remains of the Bunker, the YorHa space station from which 2B and 9S operated, or at the very least a convincing simulacrum of it. Starting in a blasted desert overlooking the vast wrecked station, the raid group quickly descend into a fight against the first boss of the instance; the 813P-operated Aegis Unit (rolls right of the tongue). A large inscrutable piece of industrial machinery, the Aegis Unit resembles a cross between a jet engine and a blender. This first encounter is utilitarian, to say the least. After the highly characterful and unique encounters of The Copied Factory, the fight against the Aegis Unit feels a bit pedestrian. 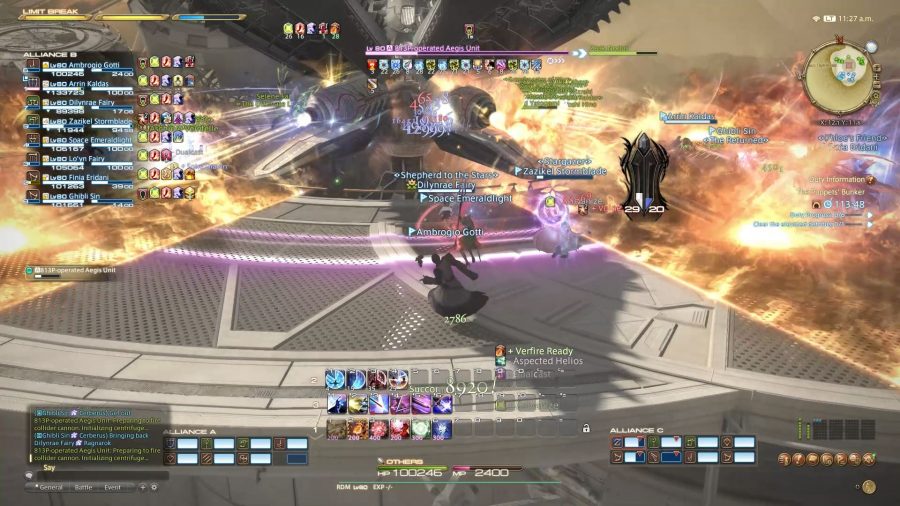 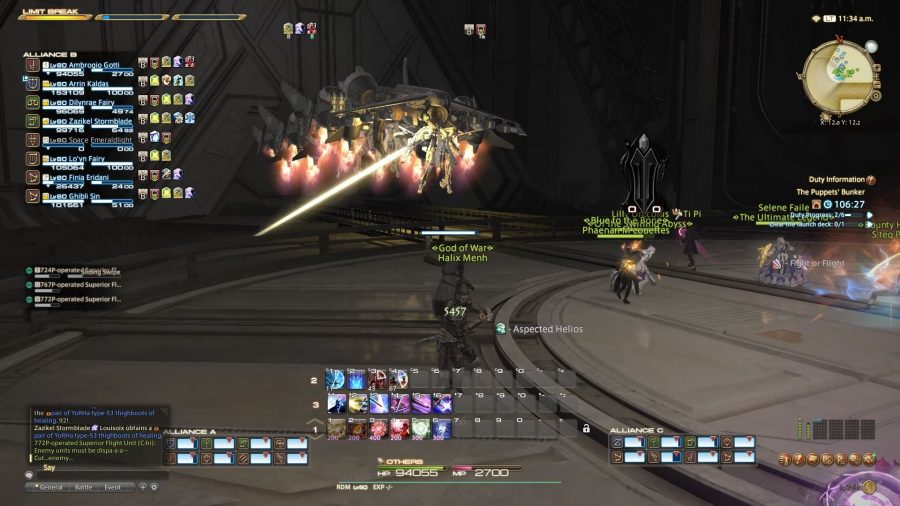 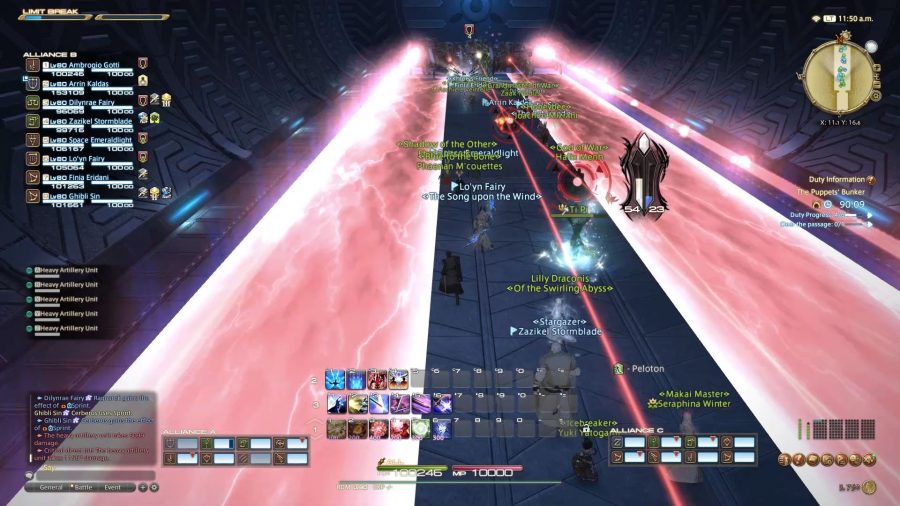 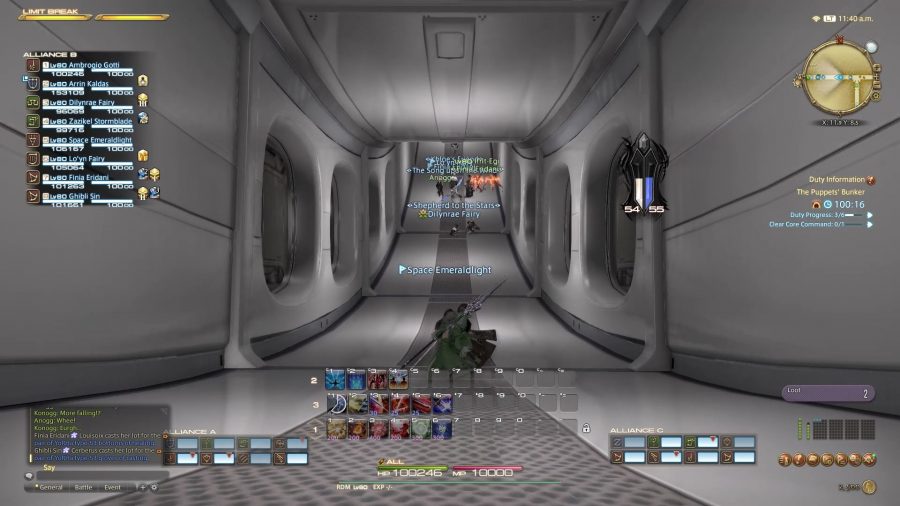 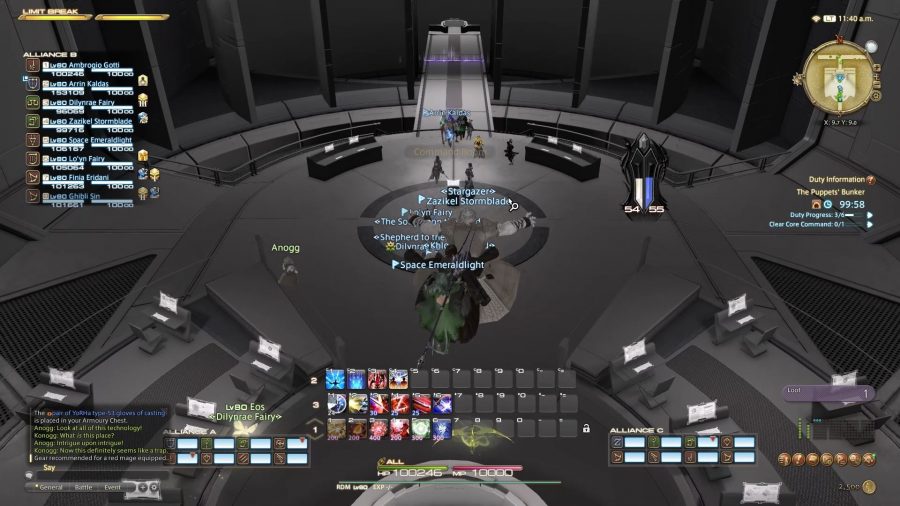 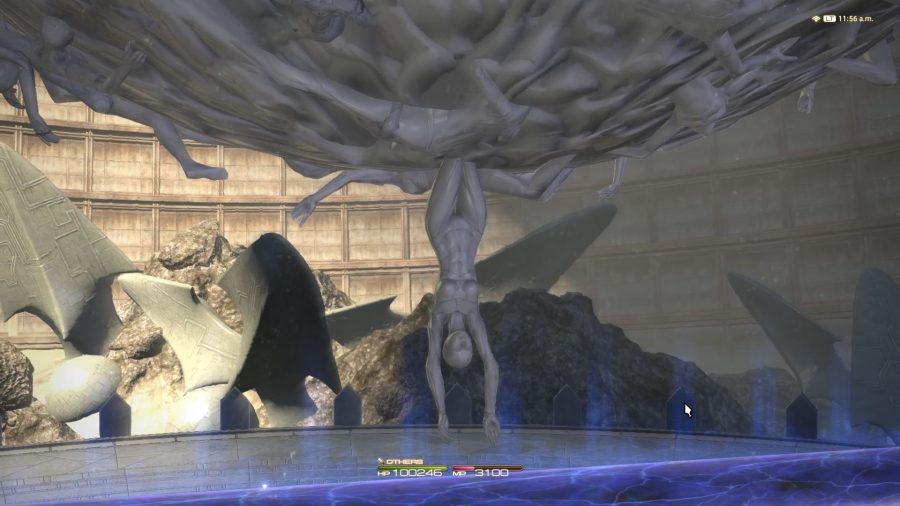 Fortunately things pick up considerably with the second encounter, a fight against a trio of Superior Flight Units. These are beefed up versions of the flying exosuits piloted by YorHa operatives, complete with ludicrously hefty jet attachments. As well as being a fun twist on an distinctively Nier element, the fight itself is creative and fast-paced. Each raid party is tethered to a specific Flight Unit, and the three war machines syncronise their attacks in increasingly inventive ways.

2P, the not at all suspicious photo-negative of Nier Automata star, 2B, had all of us fooled before her stunning turn to the dark side. Ok, not really. But 2P’s white-clad android comrades are apparently a creation of the machine lifeform antagonists, made to combat YorHa.

The flight units disposed of, the party journeys into the Bunker itself, sliding through the iconic curved hallways and visiting the command centre of this twisted mockery of YorHa. Just beyond the command hall, the next boss waits – the 905P-operated Heavy Artillery Unit. The fight itself is similar to the Aegis Unit brawl, with a strong focus on positioning, but the arena is vastly more interesting; a greyscale chamber flanked by gigantic computer screens sporting creepy android Operators and propaganda spewing scrolling chyrons.

With the various robotic guards out of the way, the raid party descends into the hidden vaults at the very bottom of the vast complex. After an amusing shoot-em-up-esque gauntlet, they arrive in the final chamber. 2B is standing, battle-weary, over the body of 2P. A glow emerges from the fallen android, and a strange, half-formed mannequin-like android body rises out of her remains. 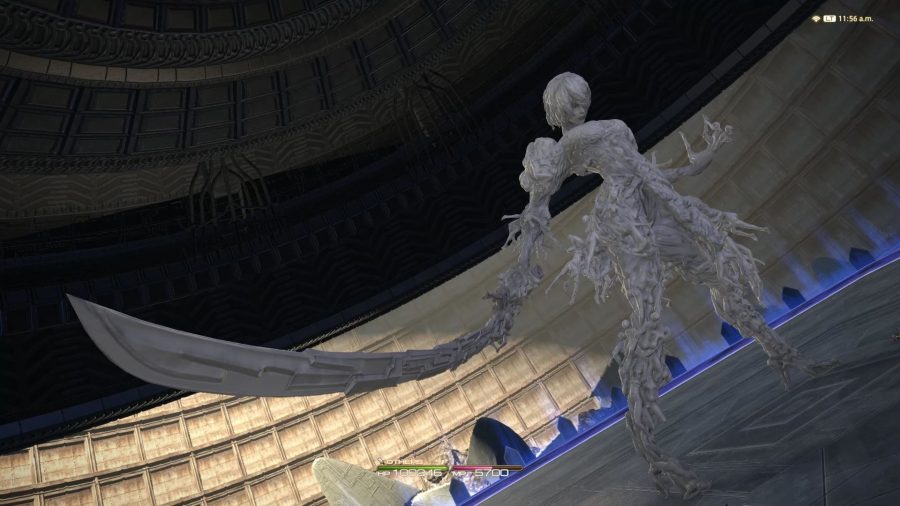 Scores more emerge, piling on top of each other, eventually forming a gigantic sphere of crawling, featureless carcasses. Enjoy that in your nightmares, by the way. But this is not even her final form… When the giant ball is defeated, it shifts and forms a gigantic 2P, made entirely of android carcasses.

Like in the first chapter, the story remains mostly a convenient justification for the crossover. While that would be expected in most MMOs, which are typically light on genuinely interesting storytelling, FFXIV has typically been a cut above the rest. Given that, the bare-bones plot of the new Nier content is a tad disappointing.

Come together: The best MMORPGs on PC

Even so, The Puppets’ Bunker is exactly the kind of well-polished, slick, and enjoyable content that FFXIV has become known for. The art design is stunning, the music is a perfect combination of Nier Automata’s melancholy strains and the more bombastic MMO score, and the encounter design is, for the most part, exactly as frantic and challenging as a good raid should be.

It must be said, however, that this new outing is significantly more reserved and traditional than The Copied Factory was. While the encounters in that raid leaned into the bullet-hell style of Nier, the new 5.3 bosses feel like more of a return to the standard formulas. This raid is absolutely worth playing if you’re already a long-time FFXIV player, but for Nier fans it may not be worth levelling a character specifically to experience it. There’s an original story here, but it feels like due diligence, and the novelty is starting to wear off.