As men with massive weapons and even bigger hair take the fight to divine, resplendent foes, every last-minute block and bombastic backflip is met with deafening shouts. The Final Fantasy XIV Fan Fest faithful are basking in the teaser trailer that announces the third major expansion to their beloved eight-year-old MMO: Shadowbringers.

The thousands of fans contributing to the din in the conference hall of Las Vegas’s Rio hotel are a dedicated, if demanding, bunch. In each lull before the reveal of the next system or story tidbit during the keynote – expertly orchestrated by the teasing maestro that is game director Naoki Yoshida – desperate cries of “MORE JOBS!” pierce the silence. It’s as if I’m in the midst of an economic crisis about which I’m entirely oblivious.

If this is a political rally, then Yoshida-san and his team should be voted in for another term: the reveal of “multiple new jobs” as when the Shadowbringers release date arrives certainly went down well. What’s more, the Blue Mage – announced by excited and appropriately caped Square Enix CEO Yosuke Matsuda – will come earlier than expected as part of patch 4.5. It might only be a “limited job” designed with solo players in mind, but it became a memorable ‘one more thing’ moment that will go down in Fan Fest history.

Given the reaction the game is getting, it’s hard to believe this is the same MMO as the abject failure that surfaced in 2010, later revitalised as Final Fantasy XIV: A Realm Reborn. Not only do we deem it one of the best MMOs around, but the game’s playerbase hit 14 million in August this year. All of the $150 tickets for this Fan Fest sold out within three hours after going on sale and similar events are held in Europe and Japan each year.

For fans at the event and those across the world, Final Fantasy XIV is a place where their virtual jobs are just as important as their real ones. The world of Eorzea is a rich tapestry of quests, places to explore, and of course, more cute beasties than you can shake a chocobo at. Players can band together as Free Companies, pooling items and financial resources to accomplish impressive feats, or just decorate their homes in a fantastical version of Location, Location, Location.

In many ways, the Shadowbringers keynote replicates Fan Fest in microcosm; there’s something for every type of FFXIV player. Lore buffs can unpack every last detail of the teaser trailer to speculate on the future of the evolving war against the Garlean Empire; there are new, epic 24-man alliance raids for experienced players to salivate over; and a new ‘Trust’ system will allow solo-focused players the chance to bring in NPCs to help clear tough Shadowbringers areas. There are even new places to live and user-controlled farms for, well, farmers.

And that's a wrap on #fanfest 2018! Singing us out are The Primals, with a little help from producer Naoki Yoshida, naturally. #ffxiv #finalfantasy #rock

Rarely have I seen a developer engage with their community like the vibrant, energetic Yoshida. Known by the chanting crowds as ‘Yoshi P’, he is a literal rockstar, cameoing in developer-led band The Primals alongside sound director Masayoshi Soken. Meanwhile, members of the dev team judge cosplay contestants and crown the victors of the event’s PvP tournament, which is mercifully dab-free.

More meaningful in the long-term are sessions in which fans have an active role in changing the course of Final Fantasy XIV. Changes to the game’s vanity-based Glamour system are decided by the volume of cheering. Another panel invites fans to collectively draft their own lore for a type of in-game liopleurodon. 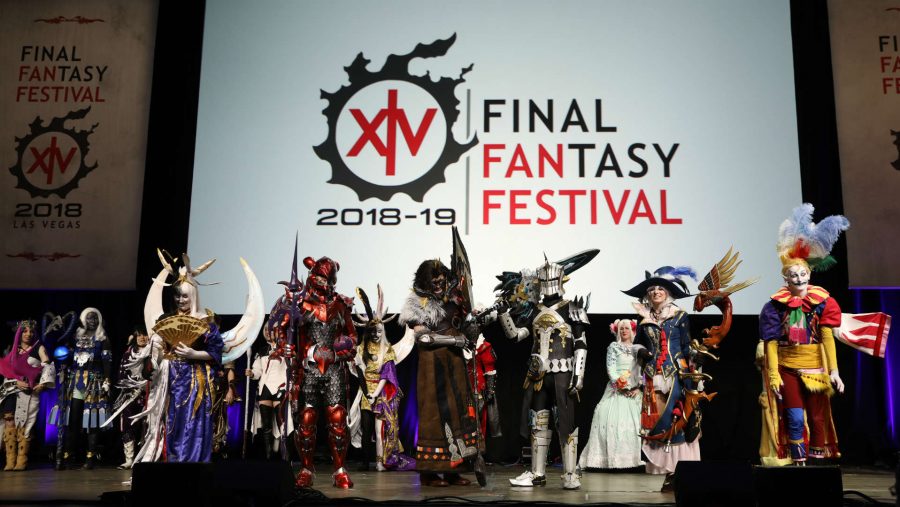 The suggestions are predictably irreverent. “Horns on top of horns,” one suggests and co-lead world developer and lore developer Michael-Christopher Koji Fox notes it down with a chuckle. Ultimately, fans decide this fauna should be called ‘The Vegetarian’ and that – despite it being a naturally water-based entity – it should have “a penchant for skinny dipping.” It’s enjoyable nonsense that couldn’t possibly be acted on, or so I thought: lore for The Vegetarian went live in the game the next day.

Countless developers claim to engage with their community, but rarely have I seen that ring true quite so much as it did at Fan Fest 2018.